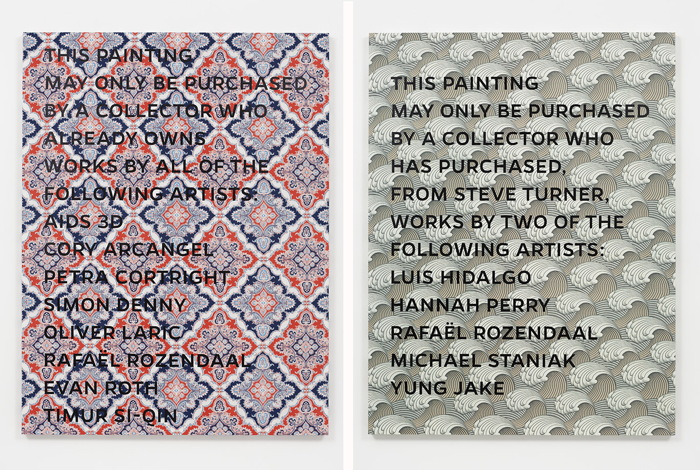 UPDATED 420 UPDATED 2018
I learned of “Strings Attached,” Jonas Lund’s most recent show at Steve Turner from this Powhida tweet and was intrigued. I have not seen it, but from the press release, it’s not obvious Lund has, either: “Lund uses fabric wallpaper as backgrounds for the works, and their messages have been painted by a sign painter according to Lund’s directions.”

I would buy one of these just so I could force it to be de-authenticated. http://steveturner.la/exhibition/jonas-lund-2#8 @gregorg @TwoCoats

Which is fine, and very L.A. Lund’s chosen font is an obligatory genuflection toward Conceptualism’s patron saint of outsourcing the boring art to a sign painter. Point #1.

Point #2, fabric wallpaper [sic], a way to differentiate the product, but also a nod to function.

Point #3, image-of-text is also a functional mode in networked screen media, where it decorates Facebook walls and circumvents 140-character limits. 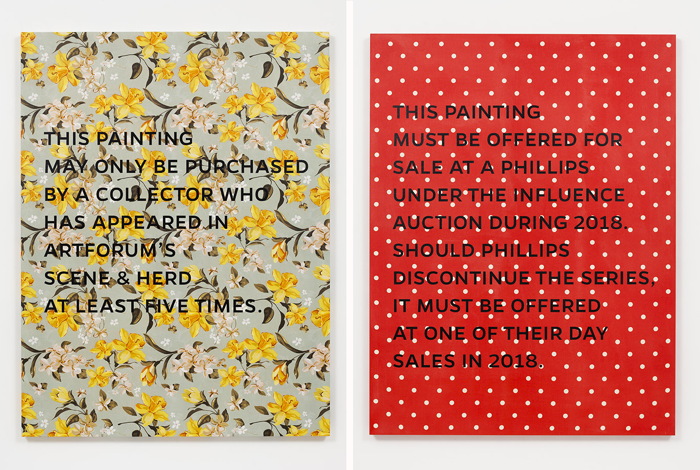 Point #4, the text on each of Lund’s paintings is the executive summary of the conditions placed on its sale by the artist and his dealer, emphasis on the latter. From the press release again: “As a group, the 24 paintings encompass contradictory efforts made by gallerists who both want to fuel market momentum for their artists while trying to shield them from the damaging effects of quick-profit speculation.”

Conditions of sale are not new. Seth Siegelaub developed an artist’s contract whose longest-running and most-well-known deployer is Hans Haacke. Andrea Rosen gets first dibs on buying back your Felix Gonzalez-Torreses. Marianne Boesky’s resale clauses mean she can buy it back at the auctioneer’s reserve price you agree to. She also kept herself in charge of managing Takashi Murakami wallpaper [!], even after the artist moved to Gagosian. Zach Feuer would only sell you a Dana Schutz if you also bought a bigger one for a museum. Barbara Gladstone used to make people who wanted a Matthew Barney buy a Richard Prince painting.

Turner is following a standard practice which, once styled, becomes the explicit content for the art itself. Lund’s paintings make visible the contours of these various aesthetic relationships, like bodies humping under a sheet. Or on top of one.

The conditions for each painting vary, but they all involve a constraint on who is allowed to buy it, or b) what the buyer is permitted or obligated to do with it. [The actual, binding agreements, I understand, are the sales agreements, not the painted text, which is just for show.] The specifics are played for absurdity, but they resemble actual factors that can shape an art transaction. A ten-year sales ban seems totally reasonable compared to a requirement that a work “be offered for sale at a Phillips Under The Influence auction in 2018.” Or that it’s only available to “a Golden Globe winner” LOL. 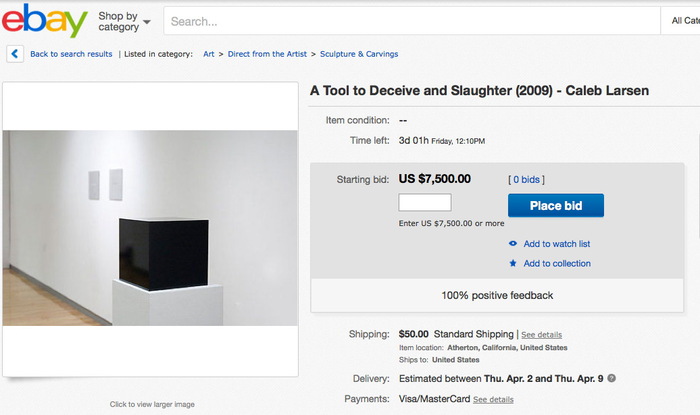 Such micromanagement of the commercial fate of each painting reminds me of Caleb Larsen’s 2009 sculpture, A Tool to Deceive and Slaughter [above]. The minimalist black cube contains a computer programmed by the artist to sell itself on eBay, with a starting bid equal to the current owner’s purchase price. The details, including the requirement that the owner keep the work connected to the Internet, are spelled out in the purchase agreement, and are monitored by the artist himself.

And by me. I’ve had A Tool in my saved eBay searches for a few years now, and it’s been missing as often as it’s been for sale [The last auction ended Apr. 3, and it hasn’t been back.] And it hasn’t sold in a loong time. In fact, it’s been $7,500 for as long as I can remember. Perhaps Larsen envisioned A Tool circling the globe as it flipped itself to the sky. Instead, it’s meeting the illiquid fate of most artworks, and its relentless, inflexible availability only underscores the reality that no one (else) wants to buy it. 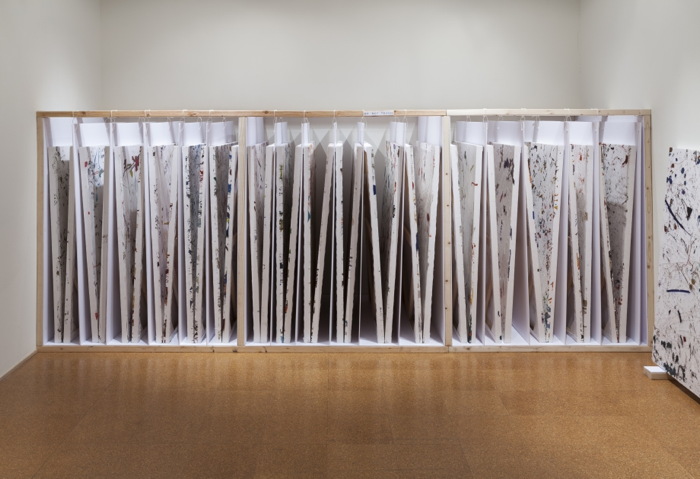 [Lund has done something similar already: his 2014 show at Turner, “Flip City,” had 40 generic crapstraction paintings outfitted with GPS trackers that would update a website with their current whereabouts. Except that as of Christoper Knight’s review, the data only showed that none of the works had sold or gone anywhere. Like A Tool, their carefully thought-out future amounts to marking their own market failure.

UPDATE: The artist points out that the Times review is inaccurate, as it was written before any of the paintings shipped. flip-city.net shows the current locations of the various paintings. greg.org regrets, among many things, the error.]

Point #5, Taken in total, they amount to an attempt by Turner (and Lund) to micromanage the future of Lund’s artworks. But just as science fiction is always about the age in which it’s written, the strings in “Strings Attached” are almost entirely reflective of this exact moment in Lund’s career, Turner’s positioning of him, and how the art market handles him and his work. It is the economic future extrapolated in specific detail, from three weeks ago. 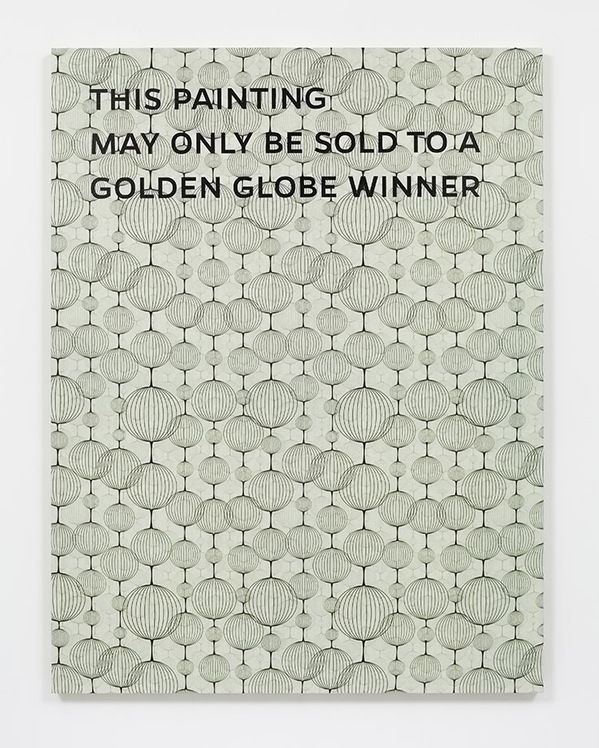 If anything–Point #6–it should be reasonable to reverse engineer a portrait of Turner’s and Lund’s venture from the seemingly ridiculous conditions placed on each painting. Far from being impossible to match, I actually expect the conditions were written with specific collectors in mind; that Turner and Lund basically tailored each painting to one or maybe two of Lund’s existing collectors and the gallery’s clients. That they knew who was on the waitlist, and tallied up the number of times they appeared in Artforum party pics. That the Aspen Museum had already requested an auction donation, maybe even through a Lund-collecting trustee. That the actor who played Jordan Belfort in The Wolf of Wall Street has won two Golden Globes, and that actually namechecking him might muck up the deal. 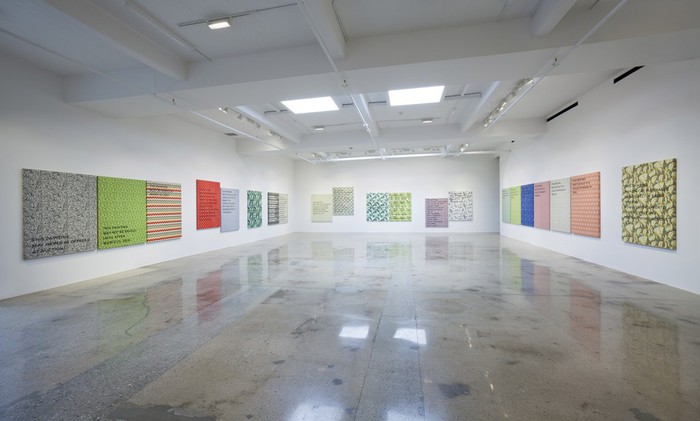 Whatever uncertain folly appears to the gallerygoer off the street, the reality is, the show has been hedged; it offers all the frisson of a Giacometti auction.

Pointing to Point #7, since I love Giacometti: do these securitized image-documents have any presence or visual appeal, or is tasteful decorator backdrop with a veneer of personalized Concept all you get? What if you like one, but not the one that’s targeting you? Forget being allowed to choose; is it even possible to have a preference or make a judgment? I just realized all the conditions pertain to how Lund’s paintings are bought and sold, and none address how they’re installed, shown, lent, or seen. Can these paintings overcome such indifference? Only time will tell. Or won’t.