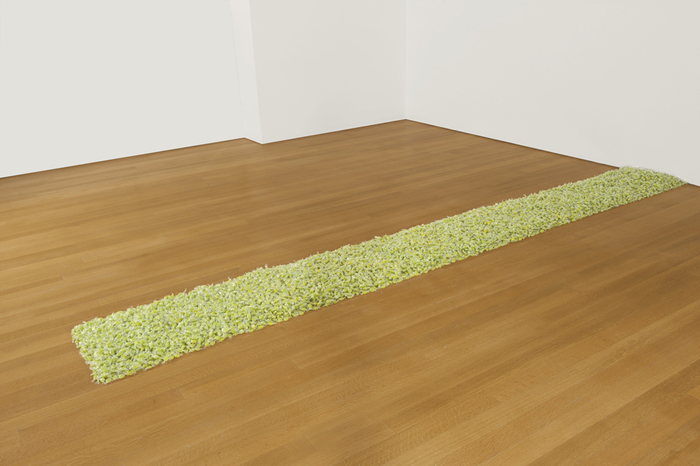 “Untitled” (L.A.), FKA “Untitled” (Rossmore) image via christies
Howard Rachofsky bought Felix Gonzalez-Torres’ 1991 candy pour, “Untitled” (Rossmore)” in 1998. It consists of green wrapped candies spread on the floor with an ideal weight of 50 lbs. That was presumably the title when Ranbir Singh purchased it in 1991, and when he sold it in 1998, even though the 1997 catalogue raisonne lists it as “Untitled” (L.A.). [Another candy pour from 1991, also with green candies, but an ideal weight of 75 lbs., bears the orphan title “Untitled” (Rossmore II).] Rachofsky loaned his pour to the Modern Art Museum in Fort Worth, and exhibited in a bathtub of his Richard Meier-designed house. 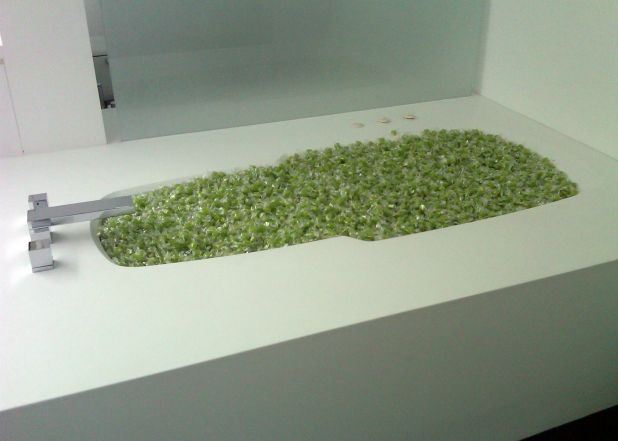 Felix Gonzalez-Torres, “Untitled” (L.A.), 1991, as installed in Howard Rachofsky’s tub, image by Andrea Duffie via forthworthanewperspective
Rachofsky and his wife donated or pledged the house and much of his collection to the Dallas Museum in 2005-Cindy Rachofsky specifically mentions the Felix piece in this interview-so it’s frankly baffling that he sold “Untitled” (L.A.) last week at Christie’s, even if it did bring $7.7 million. But DFW’s loss is Bentonville’s gain.
ArtNEWS reports the buyer of “Untitled” (L.A.) is Alice Walton’s Crystal Bridges Museum of American Art. I would imagine that the politics of the Wal-Mart heir would have pissed off and/or inspired Felix to no end. But after re-reading his 1995 interview with Rob Storr about politics and culture and audience, and how he wanted to operate like a spy, I think he’d see the acquisition of his work by Crystal Bridges as a triumph. He has successfully infiltrated the beating red state heart of America’s conservative plutocracy.
Of course, in the 20 years after the artist’s death, the cultural terrain has shifted, and if it doesn’t exactly end up being the wrong one, the mountain Felix scaled offers views of still higher, more difficult peaks.

And so it occurred to me almost instantly to make another piece, inspired by Walton’s “Untitled” (L.A.) acquisition: “Untitled” (Crystal Bridges) consists of Wal-Mart money, free for the taking and endlessly replenished, with an ideal installation weight of 50 lbs. It could be a pour, but it probably works best in Felix’s other trademark form, as a stack piece. It looks a bit like “Untitled” (Passport #II), but with cash instead of little booklets. 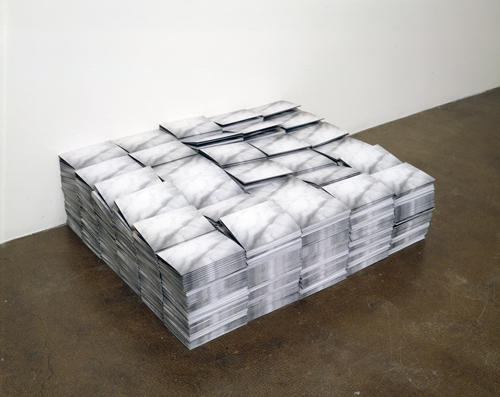 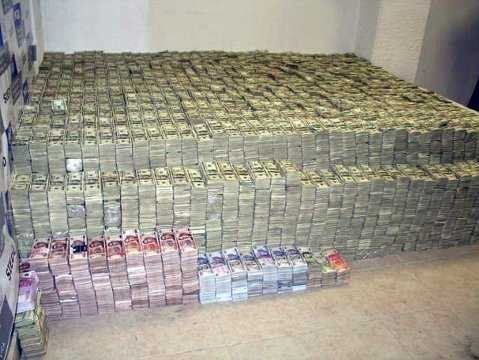 $207 million of Sinaloa drug cartel cash weighed 4,500 lbs, not an ideal weight for the sculpture, but I’ll leave that to the owner’s discretion.
Since the Walton family only has $147 billion right now, they’ll have to manage the installation with an eye on both ROI and replenishment rates. I’m sure they can do it. 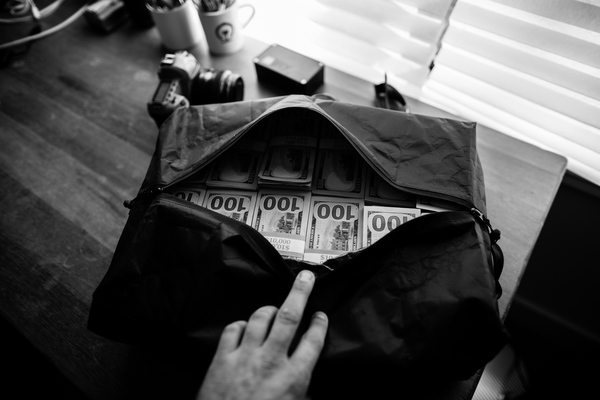 image of 1M Hauly from SDR Traveller
I’ve rebooted Felix works before, but I think the idea for this piece crystallized so immediately because I’d been primed to consider the spatial implications of a million dollars in cash. Just a few days ago, Michael Sippey tweeted about the 1M Hauly, a high-performance duffel bag by SDR Traveller optimized for the secure, discreet transport of $1 million, in 10,000 $100s. 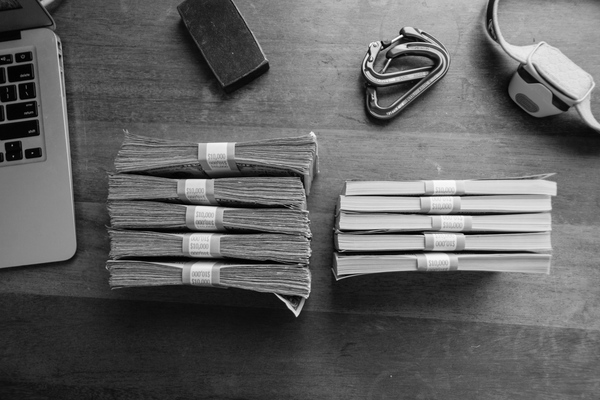 fat v. flat, via SDR Traveller
Turns out used, street, dirty money takes up as much as 40% more space than crisp, fresh bank product, but the 1M Hauly can handle it all. When strapped, 10,000 bills fits into a 20.4 lb cube 18x12x6 inches. So if it were stacked, “Untitled” (Crystal Bridges) could be an 18×18-in square about 10 inches high. It’s an adorable scale, domestic, almost intimate, which will provide endless [sic] enjoyment and engagement for museum visitors. As long as they don’t get too grabby. And as long as the Waltons don’t go broke.
[I haven’t exactly asked, but I bet SDR Traveller would be willing to discuss the commission of a custom-sized travel bag for “Untitled” (Crystal Bridges). Interested collectors should get in touch with me for details.] 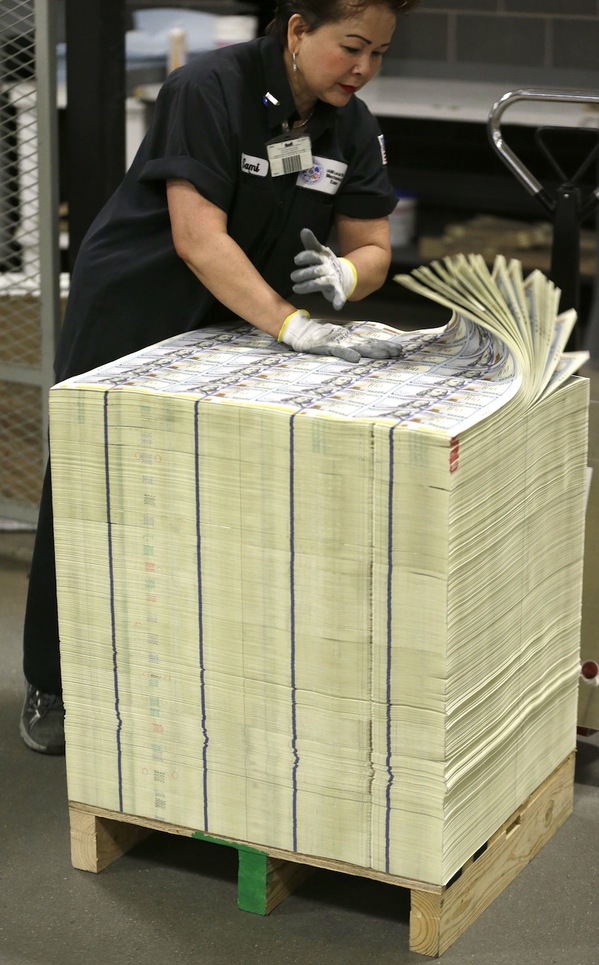 uncut sheets of new $100 bills at BEP in 2013, image: AP/LM Otero
UPDATE: OR, maybe there is another way. Uncut currency sheets sell for a premium from the Bureau of Printing & Engraving, but they’d really give the piece a Felixian feel. The ideal height for a stack of 32-note sheets like the ones above would be about 775 sheets, about 6 inches. The BEP online store only has 16-note sheets, though, for $1,800 each. See if you can get a volume discount, or a subscription.
Previously: On Politics and Art
suddenly related: “Untitled” (Orpheus, Twice), 2012