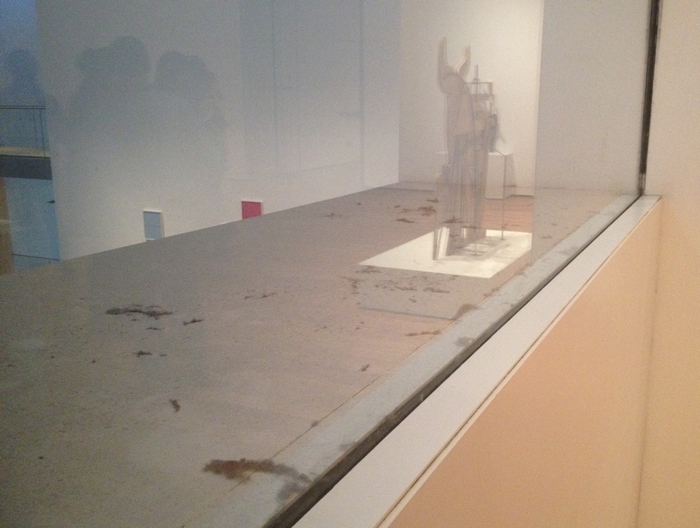 Dust Breeding (Bull), 2016, dust, museum, reflection of Picasso sculpture.
Last week I went to see the Picasso Sculpture show at the Modern again. That’s when I noticed the extraordinary amount of dust on the window ledge in the last gallery. I took a picture of it with Picasso’s Bull in the reflection because it was amazing, and because it obviously reminded me of Dust Breeding, Man Ray’s photo of six months worth of studio dust and street grime settled on the surface of Duchamp’s Large Glass. 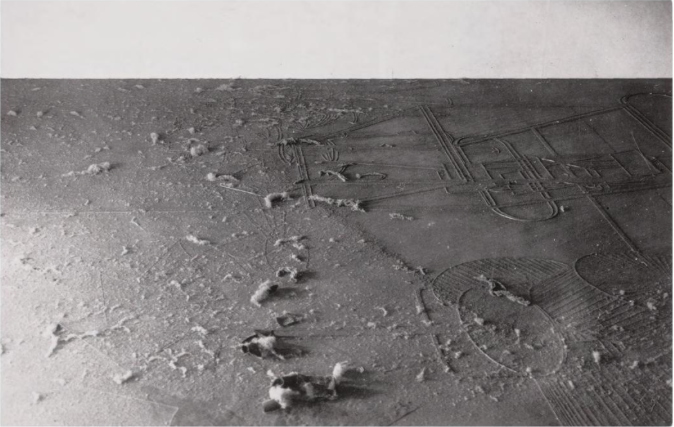 Man Ray, Dust Breeding, 1920, contact print, from Roxana Marcoci’s Photography of Sculpture catalogue.
I’ve loved Dust Breeding for a long time. Colby Chamberlain wrote a nice piece on it and Anthony McCall’s work in a 2009 issue of Cabinet on dust that has stayed with me for its conclusion: the antipathy between august art institutions and dust. I think MoMA has complicated Colby’s thesis. 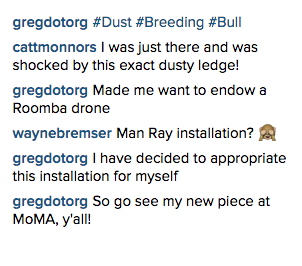 My first comment on Instagram about wanting to donate a vacuum cleaner, but I kept thinking about Matt Connors’ noticing the same ledge situation I had, and having it trigger a similar reaction. After a couple of days, I decided to make the situation a work.
And since then, I’ve been wondering what the existence of such an artwork might mean for someone, or more precisely, what knowing it exists might do for the experience of seeing that ledge.
On the one hand, it might be amazing to have people think of me and my work when they glance out the window into the atrium. Isn’t that associative frisson better even than wanting to have an endowed Roomba drone named after me? Just think of the dialogues!
Right now the gallery is filled with jaw-dropping sculptures Picasso put together out of junk and scraps of wood, in a show that includes artworks made from cigarette-burned napkins. Dust blends right in. But in a few weeks, the Museum’s permanent collection will return in some form. What interaction might happen then? Duchamp put a little sign next to Large Glass: “Dust Breeding. To be respected.” Is it possible for that dust on MoMA’s ledge to engender respect?
Though I’m willing to find out, I’m skeptical. A few years ago, I pointed out to a guard on the 2nd floor that someone had written on the wall. She smiled benignly and informed me it was a Yoko Ono instruction piece. Which, of course it was. How cute. I was annoyed, partly for not recognizing it, but mostly that my good intentions had flipped back on me. Instead of being thanked for my civic responsibility, I was being schooled on Ono’s whimsy. I somehow doubt I was experiencing what the artist intended. 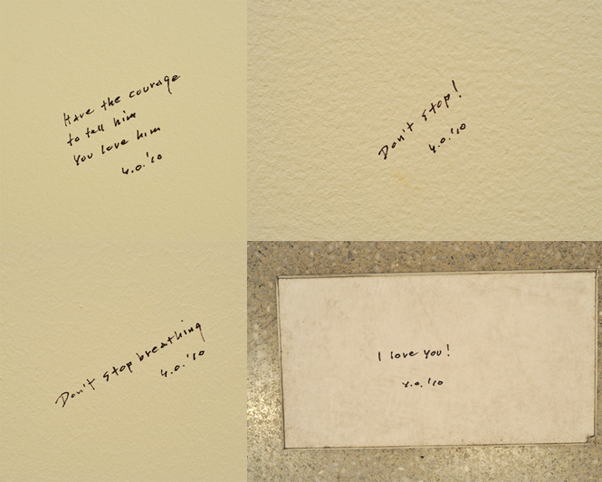 Whisper Pieces installed at MoMA in 2010, image: moma
Claiming MoMA dust bunnies as art might be seen as even lamer than Banksy, who surreptitiously stuck his own work on a museum wall and gloated about how long it took the museum to take it down. It’s just a stick in the eye of people who live to look.
Does declaring it an artwork just seem like so much ledge-half-full spin, a passive aggressive way to shame the Museum needs to break out the cherry picker and the Swiffer? Until I decided it was an artwork, I would have thought so. But now I feel actual dread knowing it’ll be gone. Some unknown day soon, maybe as soon as Walid Raad’s installation gets cleared out of the atrium, a Museum staffer is going to unceremoniously obliterate my piece. I’ll walk into the 4th floor to see some Naumans or Hesses or Broodthaers or whatever, and it’ll be gone.
But it will also be back; that’s not ten years of dust we’re looking at. And while Dust Breeding‘s parenthetical collabo right now is Picasso’s Bull, that will change too. And as it comes and goes, I’ll document its condition, and its neighbors. And if you see it, please take a picture and let me know. #dustbreeding
UPDATE WOW: From MTAA‘s Michael Sarff comes this bombshell of a project: the MoMA’s Dust Windows Community on Facebook, established OVER TWO YEARS AGO to document and appreciate the dust that gives “voice to time, memory and entropy set against the ideals of what a museum is often thought to reflex.”

@gregorg Jan 1, 2014. You are a bit late to stake out a claim but I’m willing to share the responsibility and stewardship 🙂

I am the prodigal dust son, make me as one of thy dust-loving servants! 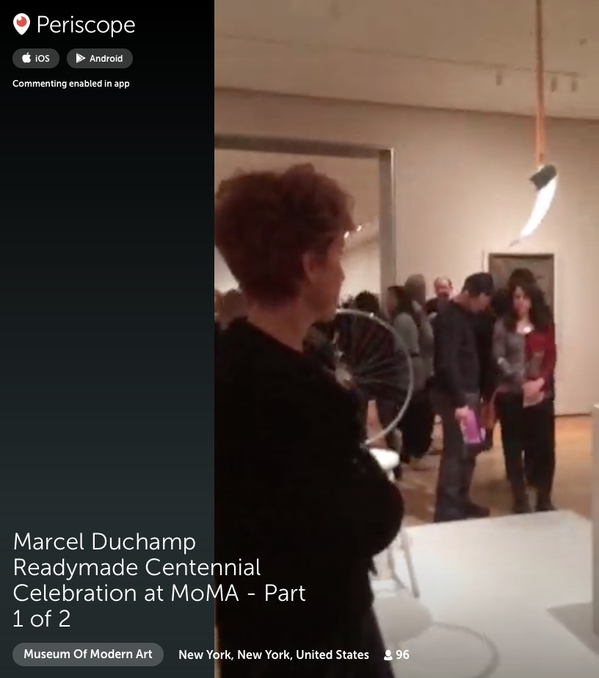 [LOL. As I write this, Ann Temkin is actually live on Periscope, offering invited guests to honor Duchamp and the 100th anniversary of the Readymade, a term which first appeared in a letter the artist wrote to his sister on 15 January, 1916. Perfect.]
Previously, related: Untitled (Andiron Attributed To Paul Revere, Jr.)