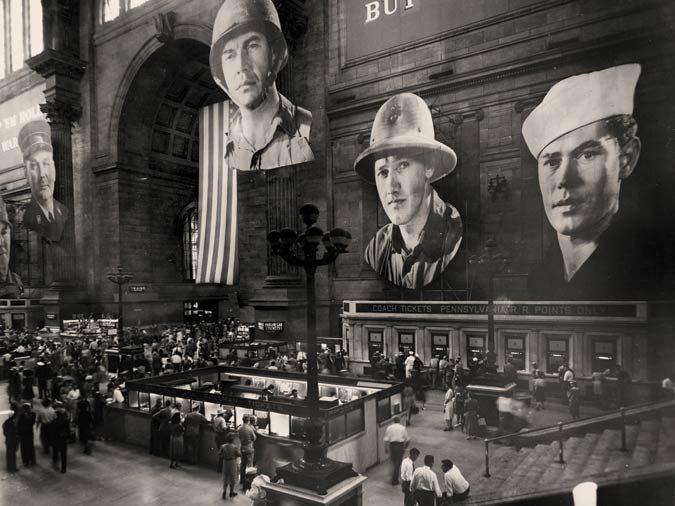 A couple of weeks ago, David Dunlap looked back at the bad old days of Penn Station before the wrecking ball made it even worse.
And I found myself thinking the same thing as Michael Bierut, that Lewis Mumford’s “crowning horror,” a modernist, curved steel and glass ticket counter installed in 1956, was actually pretty sweet.

A quick search revealed the “clamshell,” as it was known, was designed by Lester Tischy, who had worked under Raymond Loewy.

In addition to designing the Coke bottle, Loewy was a consultant to the Pennsylvania Railroad. And as this 2011 Transit Museum exhibition of the history of Penn Station showed, Loewy filled the station’s main hall with photo murals to honor the 25,000+ railroad workers serving in the US armed forces during WWII.

The Times reported that the 40×25-ft headshots went up in February 1943. The photo above shows five, an engineer, a conductor, a soldier, sailor, and a marine. The paper said there were six, including a Red Cap porter. Also that models were used for all but the marine; so it would be interesting to know if the model for the Red Cap was black. Because that would be quite a monumental public depiction of an African American for 1943.