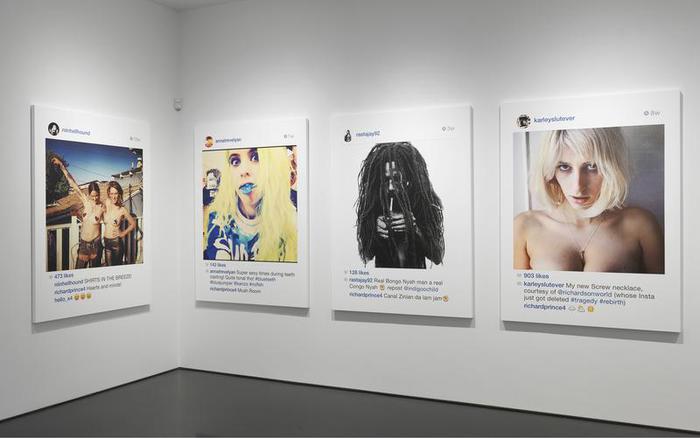 Richard Prince, “New Portraits,” installation shot, Sept. 2014, Gagosian 976, image:richardprince.com
According to his copyright infringement lawsuit against Richard Prince, Rasta-fetishizing fashion photographer Donald Graham sells limited edition prints of his 1997 photo, Rastafarian Smoking a Joint in two sizes: 20×24 inches (ed. 25) and 48×60 inches (ed. 5).
A rasta/model/whatever named @indigoochild ‘grammed Graham’s image in February 2014. It was regrammed in May by another r/m/w, @rastajay92, three months later. In May Prince commented on it, then took a screenshot, which he eventually printed at 4×5′ and showed in his “New Portraits” show at Gagosian Madison in September 2014. 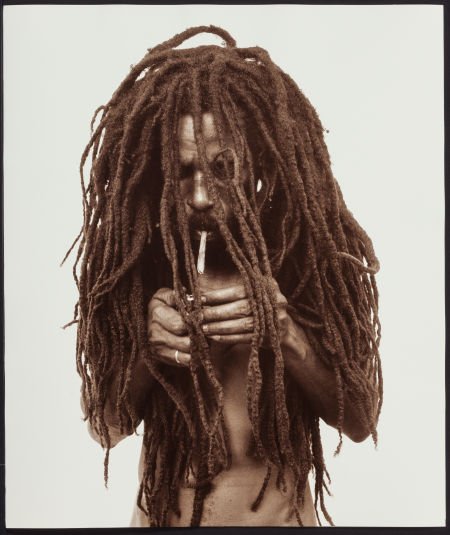 Donald Graham, Rasta Smoking A Joint, 1997-, Lambda print, 20×24, ed. 5/25, sold at Heritage Auction in Nov. 2015
In his complaint, Graham’s attorneys detail the alterations Prince made to Graham’s image, including making a screenshot, cropping, adding text and emoji, adding all the UI and empty space, and printing at low resolution and large size on canvas. Prince’s depiction is clearly of a photo on/in Instagram, with all that entails. It is clearly different in appearance, color, finish, and context, unless you’re seeking a significant amount of money, in which case these differences become invisible or irrelevant.
Unfortunately for Mr. Graham, he only registered his copyright for the image after Prince’s show, so even if he were able to prove infringement, he would only be able to recover actual damages. Since Prince sold his New Portrait to his dealer Larry Gagosian, those actual damages probably range between the profit from one 4×5 photo print and $18,500, Prince’s half of the $37,000 retail price for the IG works at that time. 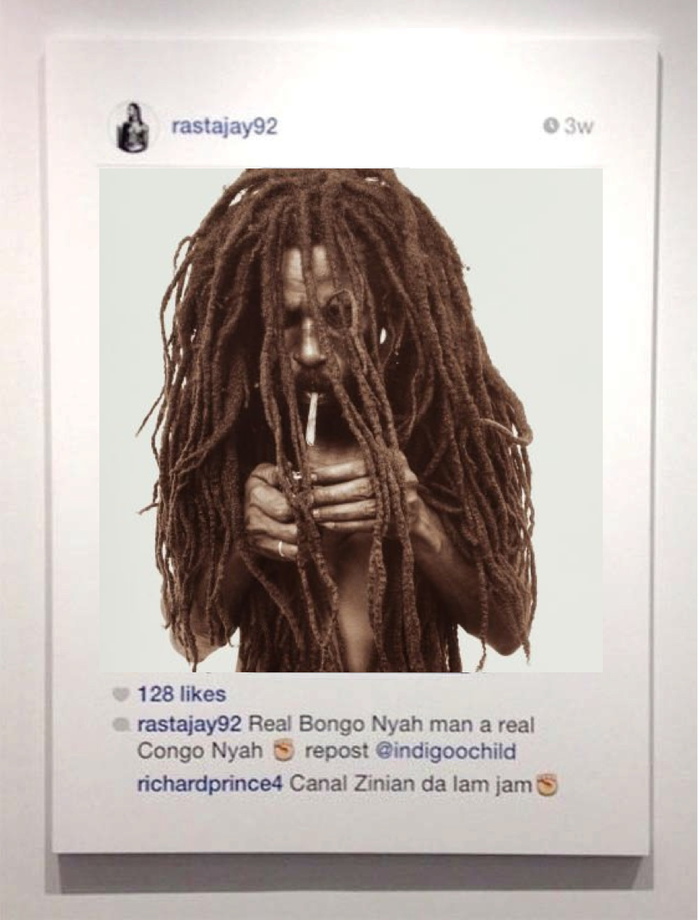 greg.org, Study for Untitled (Re: Graham), 2016, Donald Graham Lambda print cut down and collaged on inkjet on canvas, 30×24 in., ed. up to 25, I guess
It strikes me that the quickest and easiest solution is to buy one of Graham’s prints, cut it up, and collage it on top of the infringing Prince. They’re already roughly the same size. For proof of concept, I’m glad to make a study using one of Graham’s smaller, 20×24-inch prints. As it happens, the only two ever to come to auction surfaced after Prince’s show: in November 2014 in Paris (EUR2600), and in Nov. 2015 in Dallas ($2,475). Delivery date’s a little uncertain, but at these prices, I’m sure we can make it work. Win-win-win.