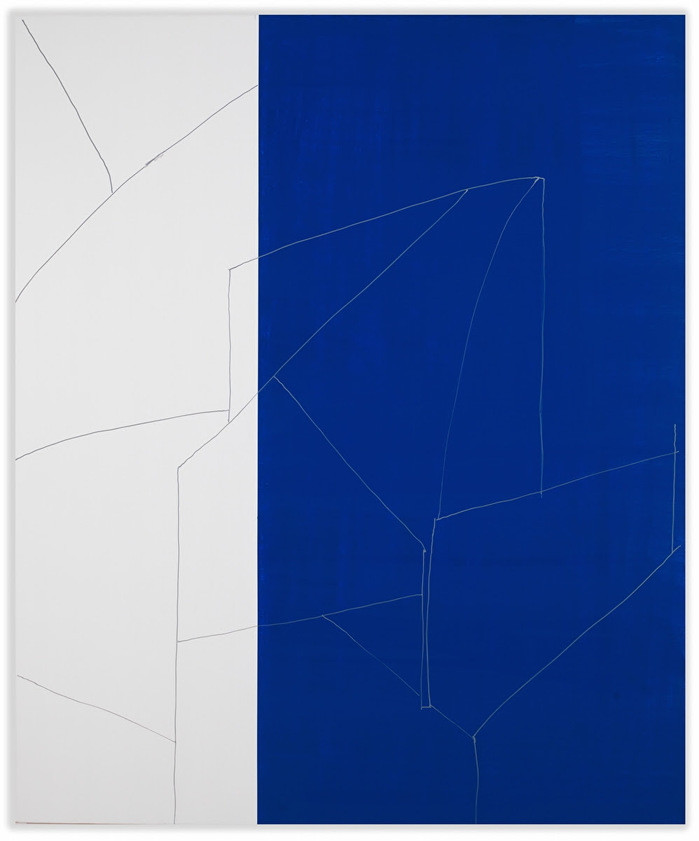 David Diao, Barnett Newman: The Cut Up Painting, 2014, 153x127cm, image: office baroque
I’ve known about David Diao’s productive engagement with the work of Barnett Newman for a while, but I was still pretty blown away to get the announcement in my inbox this morning for his show, Ref: Barnett Newman, at Office Baroque in Brussels.
Because holy smokes, he has The Cut-Up Painting. Sort of.
The story has been around for a while, but rather vague, about how Barney had instructed his wife Annalee to cut up a certain painting. It was finished, but he felt it wasn’t working. She hadn’t cut it up before the artist died suddenly of a heart attack in 1970, but she wrestled with it, and decided to fulfill his wishes. So she chopped it up.
And that night, the story goes, she had a dream, and Barney appeared and told her she was cutting him up. And she woke the next morning, distraught, and gathered all the pieces together, and had them reassembled and lined on a new canvas.
The result was what you’d expect, a Frankennewman, and the painting, or object, whatever it had become, was never shown. [Rumors circulated that someone else altogether, another painter, had destroyed, not an unfinished or rejected work, but an actual Newman. This kind of thing happens when a work is absent, invisible, missing.]
The first time I’d heard of The Cut-Up Painting discussed publicly was in a 2008 symposium at the Getty Conservation Institute. Carol Mancusi-Ungaro described the story as Annalee told it to her. It’s wild and unsettling, with a twist, when Mancusi-Ungaro says Newman had confided in her “because I’m a conservator, and because I’m a woman, and I could identify with this feeling, perhaps.” [The Getty put it on YouTube in 2012.]
The Cut-Up Painting was not included in the Menil’s show of late Barnett Newman last year, even though it did include the unfinished paintings Annalee gave the Menil for study & conservation. Sarah Rich did discuss it, though, in an essay in the show’s excellent exhibition catalogue, which also includes texts and research by Michelle White and Brad Eply:

When she first undid this unfinished work, she [Annalee] was following orders, though her dream suggests she also understood the cutting to be a violation. When she had the painting put back together, her act of preservation was also a transgression. Annalee Newman thus uncovered, in her own way, the means by which a painting might host the contours of ethical deliberation (a subject essential to Newman’s own artistic praxis). With those cuts and their stitching, with the deliberations she conducted, deferred, acted upon, and regretted, Annalee Newman performed an experience in which duty becomes consubstantial with defiance.

And now here it is, in some form, at least. David Diao has made a painting of Newman’s Cut Up Painting, and it looks pretty close to the image Mancusi-Ungaro showed briefly at the Getty, so it’s not just an imagining. I am fascinated to see it. Now to figure out how to get to Brussels.
Ref: Barnett Newman opens 27 Feb. and runs through 6 Apr 2016 at Office Baroque [officebaroque.com]
Office Baroque is also showing earlier works by Diao at The Independent NYC during Armory Week, so there’s one I won’t miss.