7/10ths of a set of Campbell’s Soup prints walked out of the Springfield Museum of Art last week, and the FBI is ON it. Unfortunately, unlike the LAPD, the FBI does not make awesome #FindTheWarhols posters, so I cobbled together their webpage into one 41 x 8.5 inch PDF file you can print at home (or at work, or wherever you keep your stash of 41-inch paper. Not my problem.)
ALMOST EXACTLY A YEAR LATER UPDATE: Thanks to @mattdpearce for tweeting out the FBI has actually made a fine-looking wanted poster for these soup cans, which you can download here [pdf] It’s only 8.5×11, but it’s a start! 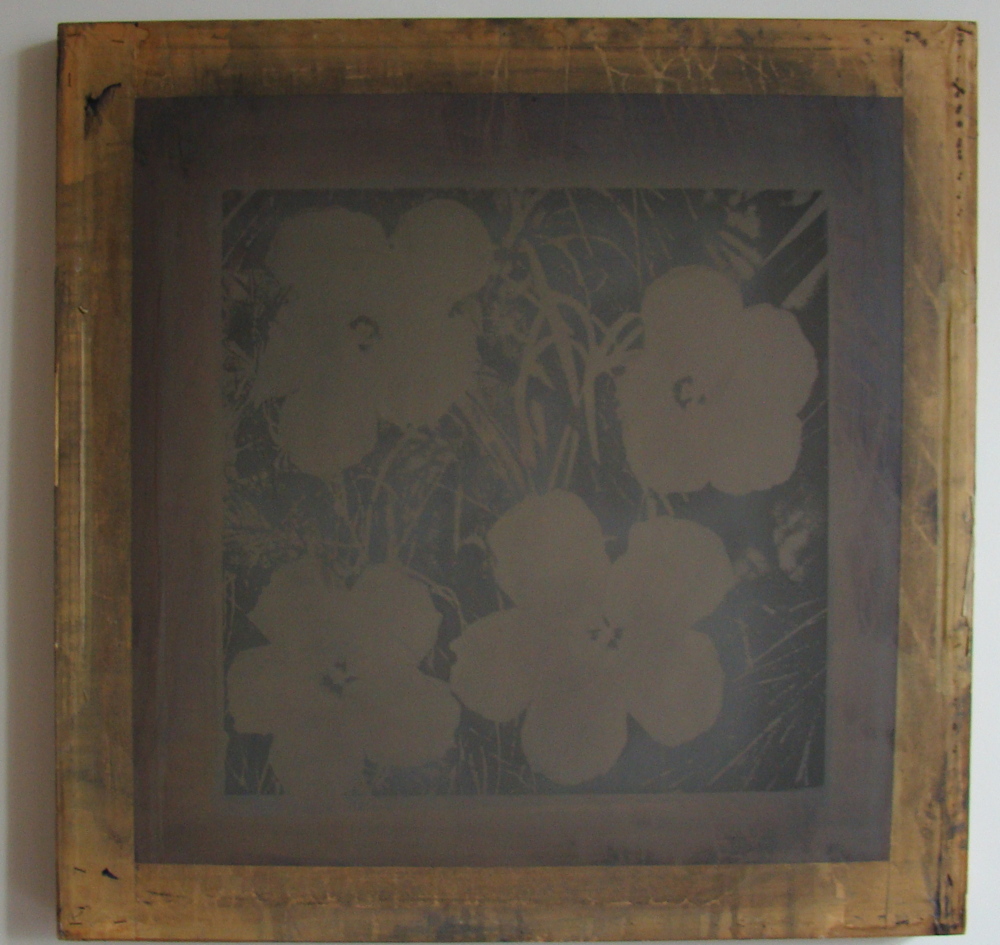 Have you seen me? Lately? Andy Warhol Flowers screen, stolen and still missing. Image: fbi.gov
What the FBI does do, though, is add stolen works to the National Stolen Art File. With hundreds of prints missing in batches of 20+, Warhol has to be the most stolen artist in the country, by volume. [Using the proper unit of measure for linear feet of stacked and racked Warhols, I’d guess 0.4 Mugrabis of Warhols have been stolen in this country. Of course, it’s mostly flotsam, so in dollar terms, all the 343 other works listed in the FBI file still don’t add up to One Gardner Unit. #FindTheVermeer]
And what is the most interesting stolen Warhol on the black market right now? It’s the screen Warhol used to print Flowers. If the screen is 36 inches across, the image would be about 24 inches, the size of the 1964 paintings. [There are also approximately one million later Flowers prints, but they’re bigger.] Is this one that Warhol lent to Elaine Sturtevant? Now *that* would be some provenance. 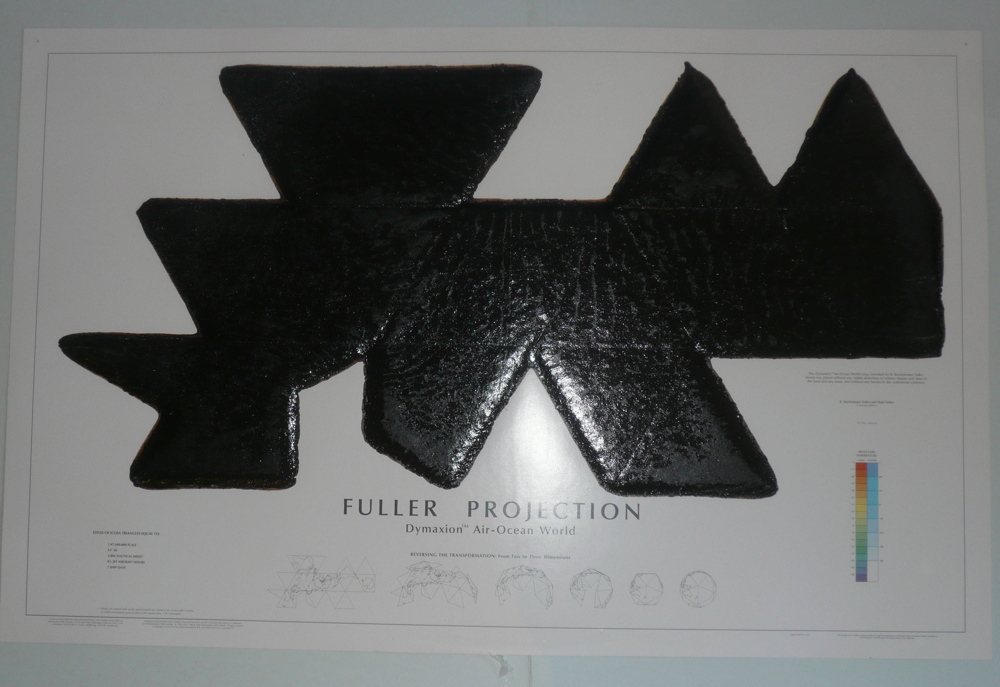 jacked Dymaxion Map with tar [?], 2009-10, by Matthew Day Jackson, still missing. image: fbi.gov]
The Warhol screen turns out to be one of 10 works in the FBI file listed with additional information of “DE106.” It’s an interesting and unusual bunch: a Larry Rivers sketch for his Frank O’Hara portrait; a Buckminster Fuller Dymaxion Map covered with tar by Matthew Day Jackson; a self-portrait by Rene Ricard.
So I called the FBI to see what the backstory was. Were all these DE106 works stolen from the same collection? “That’s an artifact of the data entry. It’s meaningless,” said the FBI Art Theft agent I spoke with. So these were not all stolen in the same incident? “No. Everything I can tell you is on the website.”
OK, thanks! Never one to take an FBI agent fielding coldcalls from a random blogger at her word, I Googled it. And all the DE106 works were stolen together, in April 2012. In DEtroit. Metadata, people. None of the links to the story on local TV news or newspaper sites work anymore, so the most thorough account of the caper is on none other than Huffington Post. [Legacy media: 0, Recappers: 1]
An unidentified collector in Corktown seems to have had a cartload of works stolen over the weekend of April 27-29. The FBI released photos […] and announced a $5,000 reward […], but they feared “the artwork may have been transported out of the country.” Which, when you’re on the other side of a bridge from Canada, is probably always a concern. 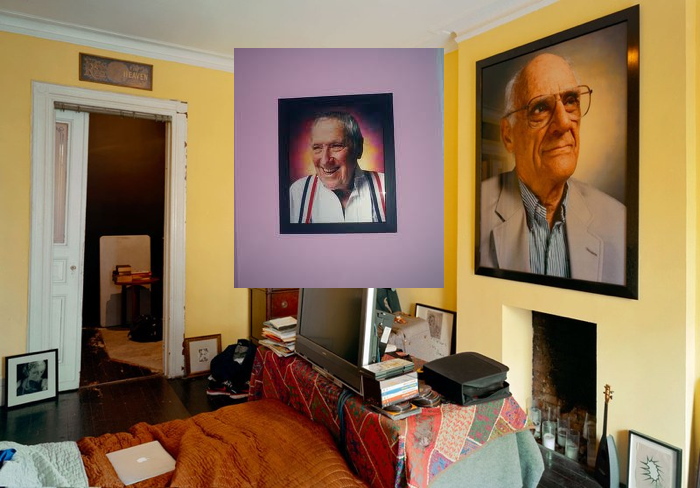 inset: the jacked Serrano photo of Weinstein, collaged onto Robert Polidori’s 2012 VF photo of Scott Griffin’s Chelsea Hotel apartment, with a Serrano portrait of Arthur Miller.
If you couldn’t tell from the paltry reward, the works were uninsured. One unusual piece is a 2003 Andre Serrano portrait of the poet and librettist Arnold Weinstein. Weinstein lived in the Chelsea Hotel, and this Vanity Fair photoset by Robert Polidori includes a very similar Serrano portrait of Weinstein collaborator Arthur Miller. It’s in the apartment of producer Scott Griffin. Who moved to Detroit, bought a warehouse building that housed the offices of HuffPo and Curbed-and had his art storage cleaned out, probably by an employee with a master key. They also took a Segway. I made a wanted poster, in case the FBI scrubs their metadata.
One blog report said the Warhol screen had “disintegrated so much over the years that it cannot be reused.” Which sounds like a challenge. What could you get from printing with a disintegrating Warhol screen? I would love to find out.
FBI Reward Poster for Stolen Warhol Soup Screenprints – greg.org.pdf [pdf]
Reward Up to $25,000 for Recovery of Stolen Andy Warhol Paintings [fbi.gov]
Detroit Art Theft: 19 Works Worth Millions, One By Andy Warhol, Stolen From Private Collection (PHOTOS) [huffpo]
Corktown Art Heist May Have Been Inside Job [deadlinedetroit]
Ad Hoc poster for FBI DE106, AKA The Corktown Caper [pdf]
Previously, related: Find The Warhol Jews, with links to previous Find The Warhols! posts, including what may be the world’s first failed Kickstarter campaign