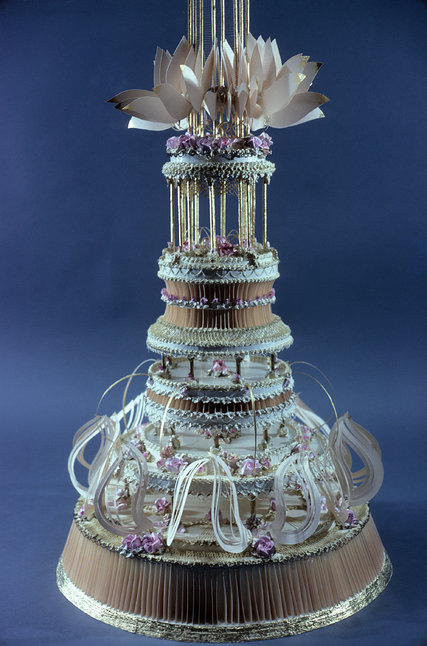 Pat Lasch cake sculpture for MoMA, 1979, destroyed, image: Pat Lasch via nyt
Feminist sculptor Pat Lasch only discovered that MoMA had thrown out an elaborate cake sculpture it commissioned from her in 1979 when a curator tried to borrow the piece for an upcoming retrospective. Randy Kennedy has the sad, baffling story in the NY Times.
Lasch made the sculpture at the invitation of MoMA’s longtime curator Kynaston McShine, but it was displayed at a gala for The Modern’s 50th anniversary, not in an exhibition. And though it was apparently kept for 20 years, it was never formally accessioned. So when its condition deteriorated, it was tossed out instead of conserved. Another, much smaller work was acquired by Prints and Drawings as a gift in 1979. But at 5’2″, the cake sculpture was not only monumental, it was more important to Lasch’s work at the time and since. Oh well. 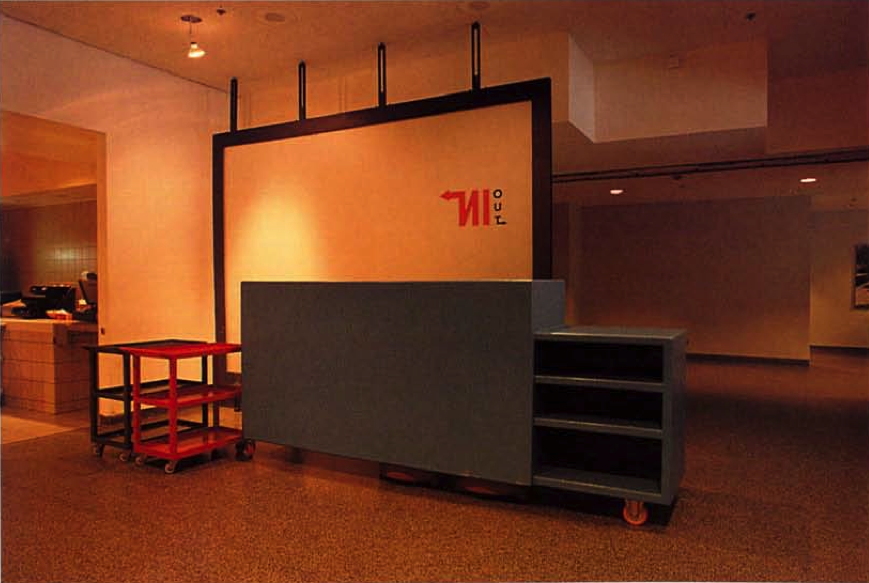 Joep van Lieshout, MoMA Bussing Station & Carts, 1995, presumed destroyed, image: Atelier van Lieshout: A Manual [pdf]
The incident reminds me of another blurry situation that began in 1995, when MoMA remade its cafe with all Dutch design in conjunction with a huge Mondrian retrospective. Along with product from folks like Piet Hein Eek [gratingly noisy sheet aluminum chairs] and Tejo Remy [those lights], the cafe included a huge commission from Joep van Lieshout: two fiberglass-wrapped bussing stations, some carts, and some garbage cans. They were basically giant functional sculptures riffing on minimalism and product. 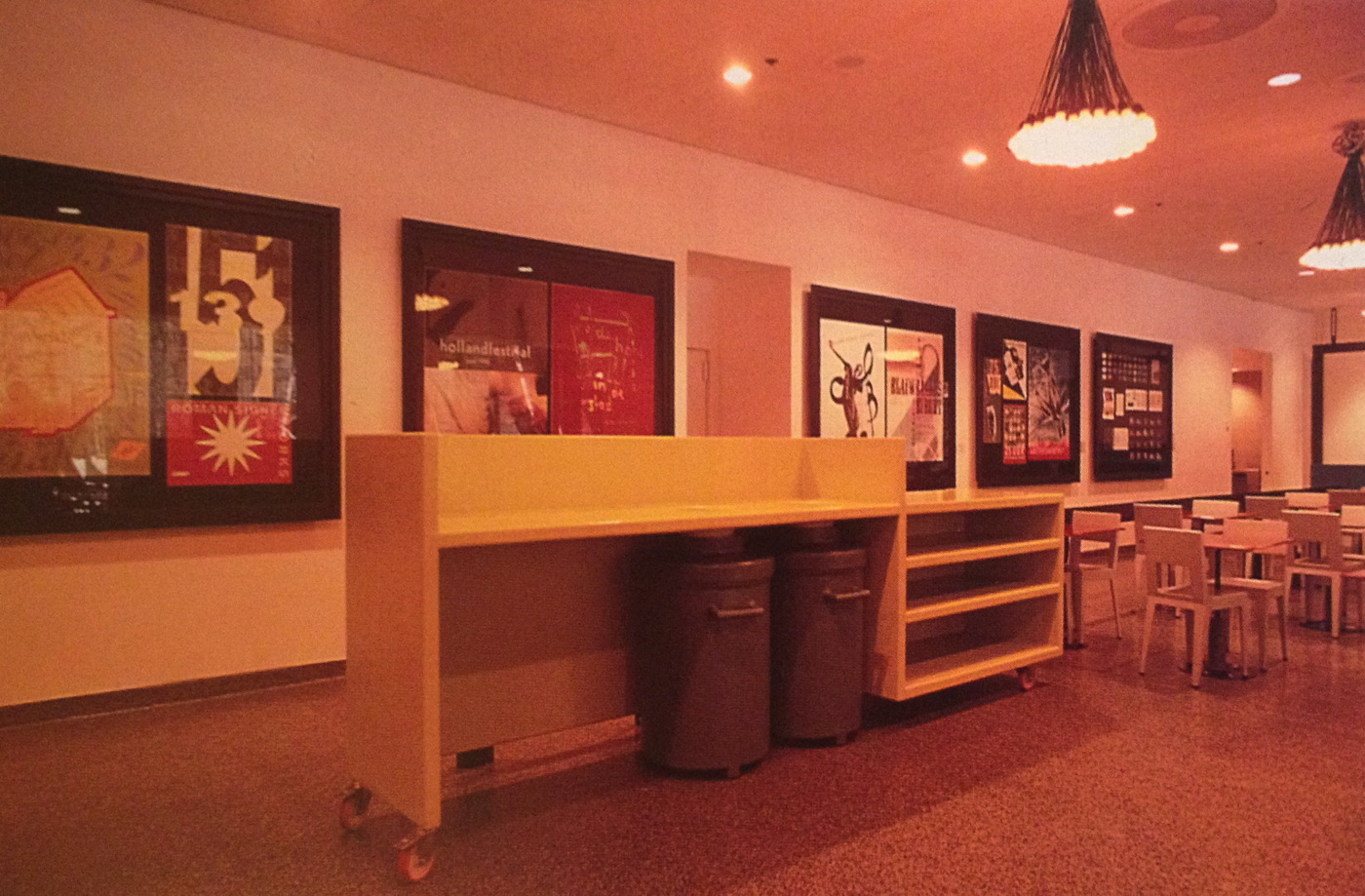 Joep van Lieshout, MoMA Bussing Station & Garbage Cans, 1995, presumed destroyed, image: Atelier van Lieshout: A Manual [pdf]
As with Pat Lasch’s gala, the cafe commission was all overseen by a curator–two, actually, Terry Riley and Paola Antonelli, from Architecture & Design. In 2009 I tried to find out the fate of van Lieshout’s objects, which disappeared from view along with the rest of the cafe in 2004, when the Taniguchi renovation started. Though chairs and lights went into storage, the hulking, 3-meter long turquoise and lime green bussing stations were nowhere to be found. 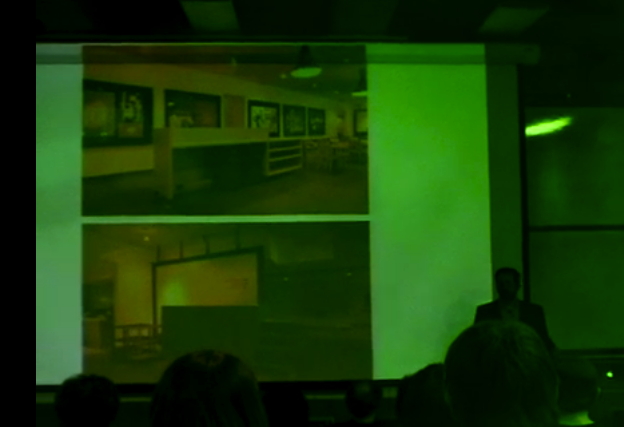 via Visiting Artist [sic], Part 6/8
[I talked about the bussing stations for the first and only time so far in 2007, at Visiting Artist (sic), a lecture-turned-performance at the University of Utah, which may be one of the first artworks I ever made. Or rather, it was the first time I really contemplated myself acting as an artist. It was a very ambivalent moment, about some ambivalent art world gestures and conundrums, from an era when YouTube encoded things inexplicably green, and wouldn’t let you upload anything longer than like 10 minutes. Maybe gotta work on that.]
Anyway, for these objects by Lasch and van Lieshout, it mattered less that they were commissions, by curators, or that their creators were artists who considered them works. What ultimately determined their fate was that the museum did not process the works into the collection. It turns out accessions matter.
On the bright side, as destroyed works, these pieces have a chance at being re-created. If I had a place to put them. Or show them.
Ars Longa, Except When MoMA Throws It Out [nyt]
Previously, related, but disorganized: Visiting Artist [sic] starts with parts 2 & 3.
Start here tho; there is no 1/8: Visiting Artist [sic], Part 2/8, Dan Flavin I [youtube]