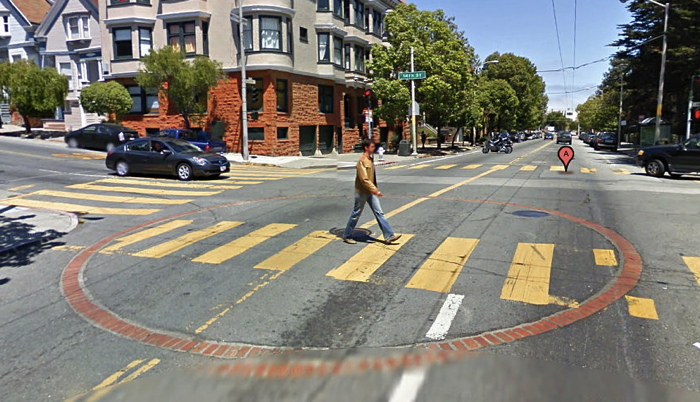 Google Street View image of an AWSS cistern at 14th & Castro, via 99pi
After water systems broke down during aftermath of the 1906 earthquake, San Francisco created the Auxiliary Water Supply System (AWSS). It includes over 170 giant cisterns beneath streets all over town. Large circles of bricks set into the street mark the outlines of the cisterns, hinting at hidden systems. In the words of 99 Percent Invisible’s Kurt Kohlstedt, the circles are a “surface expression of something much larger below.” 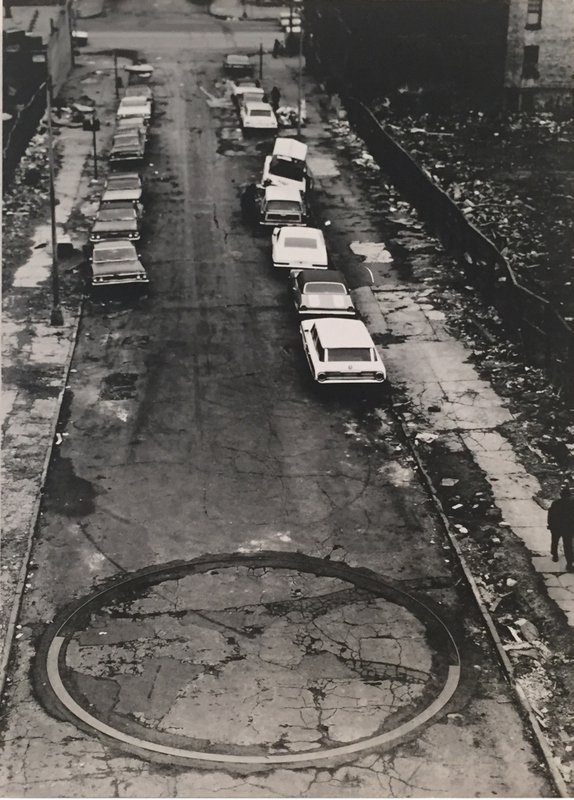 To Encircle Base Plate Hexagram, Right Angles Inverted, 1970
Richard Serra grew up in San Francisco. His first public sculpture was a pair of 26-foot diameter arcs of L-shaped steel, like a manhole collar, set into the middle of a soon-to-be-razed-and-redeveloped block of 183rd Street in the Bronx. One arc pointed up, the other down. To Encircle Base Plate Hexagram, Right Angles Inverted (1970) was included in the Whitney Annual, though Serra complained that no one in the art world went to see it. It was later purchased and given to the St Louis Museum. It’s installed in their driveway.
I’m sure Serra would say there is absolutely no relationship between these two structures. But they’re there in the street nonetheless.
Decoding Rings: Beneath the Mysterious Brick Circles on San Francisco Streets [99percentinvisible.org]
Hunting for a Richard Serra sculpture in the Bronx [16miles]