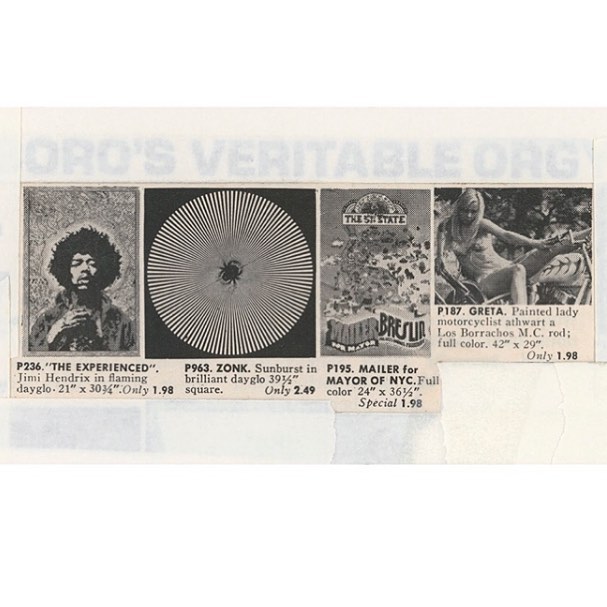 New Posters, via richardprince1234
There’s a new gang in town. Over the last day Richard Prince has uploaded a series of images to Instagram he’s calling, “New Posters.” I take New Posters to be a show. New Portraits went from Instagram to IRL. New Posters goes from IRL to IG. It’s not the first time, either.
After getting wiped for nip slip a couple of times Prince has taken to treating his Instagram feed as a temporary space; nothing lasts forever. Images go up, and they come down, like a gallery, or a booth in an art fair.
Last May Prince announced a temporary Instagram show of “Ripple Paintings,” presented through his book joint, Fulton Ryder. [I emailed to see if they were available somehow, but got no response. No/too slow?] Ripple Paintings were images of watercolored-over cartoons torn from old Playboy magazines. New Posters has a Playboy angle, too, but the show’s tightest, most relevant connections are to Prince’s own early practice, which he is clearly revisiting.
Right now there are seven New Poster images, and a video and four images (two identical) relating to Donald Trump. [update: I woke up to three. Prince says one was removed by Instagram.] The New Posters are of vintage duotone ads for posters, cut and cropped and masked into various configurations. The image above includes a poster of Jimi Hendrix; an Op-Arty sunburst; a Mailer for Mayor campaign poster; and a very Princey, bikini-clad girlfriend named Greta, straddling a motorcycle. Scraps of white paper and strips of tape mask and frame the composition, occasionally creating palimpsests like, “ORO’S VERITABLE ORG[Y].” 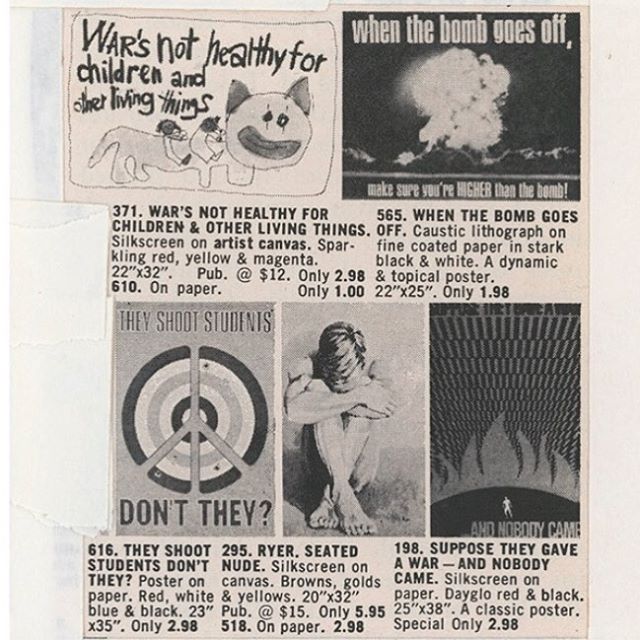 We are all Ryers now: New Posters, via richardprince1234
Other poster groupings up the political ante significantly, like this set, where a nude guy named Ryer huddles surrounded by anti-war and protest posters:
Suppose they gave a war and nobody came
When the bomb goes off, make sure you’re HIGHER than the bomb!
War’s not healthy for children & other living things
They shoot students, don’t they?
From the Vietnam War to Woodstock to Kent State, the cultural context of the late 60s and early 70s has been a regular feature in Prince’s discussions of his work. The work itself, meanwhile, is grounded in images circulated in magazines, and ads. Prince has written about “ganging” slides of rephotographed magazine images, “DJ’ing” them into various arrangements and printing the grid of slides on a single sheet. “The ‘girlfriends’ from the Biker’s Magazine were the first ‘gangs,'” he wrote in 2014. “The ‘gangs’ were mounted and framed. It was like having a whole show of a particular subject matter in one frame. Instead of having a whole room of ‘girlfriends’… I could have a FRAME of girlfriends.” 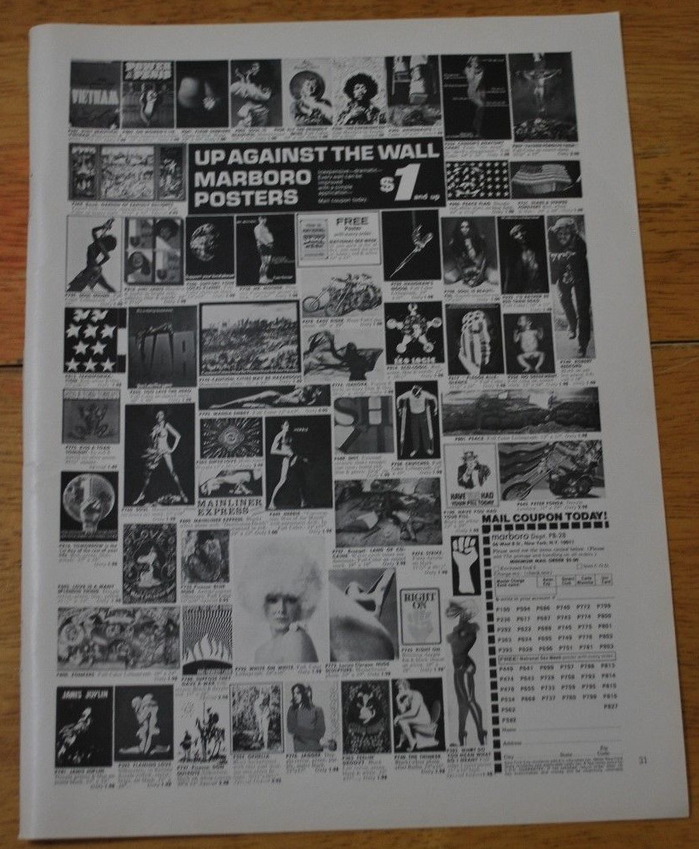 “Up against the wall: Marboro Posters”, image of ganged anti-ware fare in a Playboy tearsheet, c. 1971, via ebay
But there’s no sign of Prince ganging within these images: these poster abutments are found, composed by cropping from of a larger grid. The poster ads come pre-ganged. They turn out to be from a mail order company called Marboro Posters, which ran full-page ads in the backs of magazines, including Playboy. Also Saturday Review and Psychology Today. Each ad was a different shuffle of posters; ganging was Marboro’s process. Optimizing each ad for the demo of the magazine it appeared in, like merchandising. [Marboro tracked ad response by adding “Dept. PB-15” or whatever to their mailing address.] 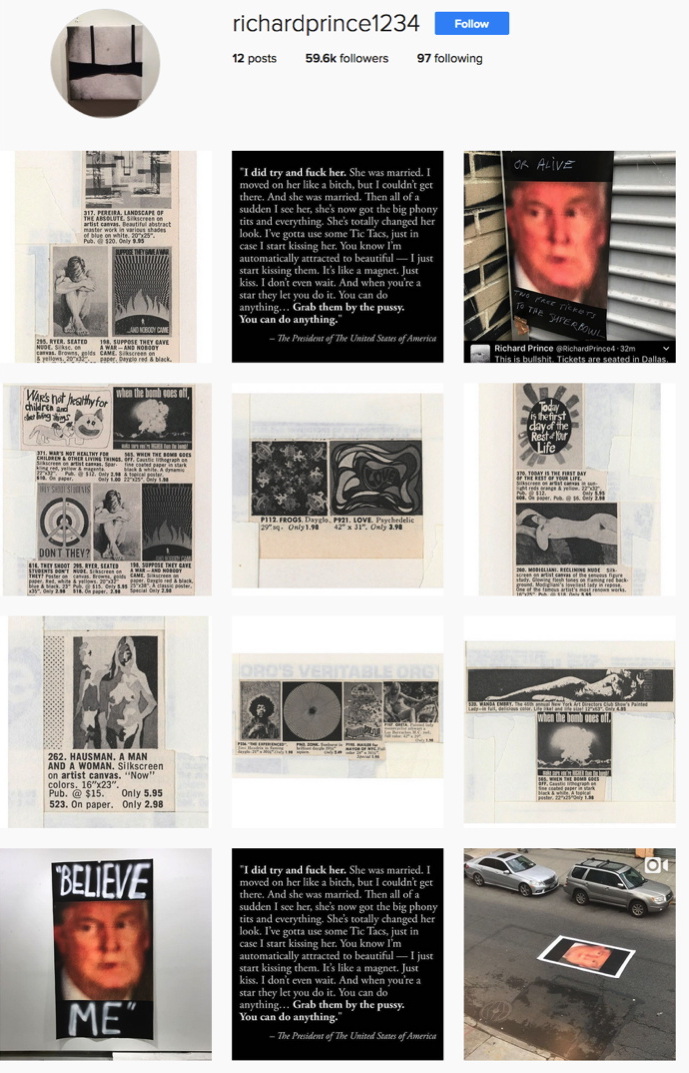 New Posters screenshot 2/1/2017, image: richardprince1234
Prince wrote of ganging slides on his giant lightbox. And of his iPhone, with a camera, Twitter, and Instagram, becoming his studio. And Instagram is where he’s ganging now, making a whole show of a particular subject in Instagram’s frame. And that subject appears to be the Trump-induced return of the apocalyptic terror Prince describes feeling after Kent State. In a birdtalk for a 2013 show of his 90s Protest Paintings at Skarstedt, Prince wrote,

But the Kent State shootings were different. That got to me. The shootings pissed me off and I found myself wandering around the campus trying to come to terms with the murder. Nixon and Agnew were shitheads and already dead people to me. I really thought they were going to try to stage some kind of coup and take over the government. I was ready to pack it up and retreat to the upper parts of the Adirondacks… put a hold on “beauty” and work out and get in shape, stockpile supplies, turn on the ham radio, do some reconnaissance, get camouflaged and ambush, (hit and run)… and guerrilla the shit out of the republican army.
Instead…

Instead, he said, he staged an impromptu protest gesture by lowering a flag to half mast on campus, which, he says, spiraled into a full-scale demonstration as students and police became aware of it. It’s an account of Prince’s history that I don’t know how to account for, whether it happened, or happened the way Prince said, I can’t say. But given our current presidentially induced crisis, I think the relevance of Prince’s 2013 text is prescience, not retrospection.
The blurred, saturated closeup of Trump has been reverberating in Prince’s social media like a fugue since the election, and I haven’t known quite what to make of it, except to find it very disturbing. Now images of Prince’s new posters of it, along with Trump’s dismal quote to Billy Bush, are members of this New Posters Instagang. IG and IRL are feeding each other [though whether these New Poster images will make a jump back to physical, printed form is not clear], and history’s all in Prince’s grille going, “Hey DJ, play that song again.”
richardprince1234 [instagram]
Richard Prince – Birdtalk [richardprince]
Previously, related? If He Did It [It being making Bob Dylan’s paintings, that is]
View Source: Richard Prince’s Instagram Portraits