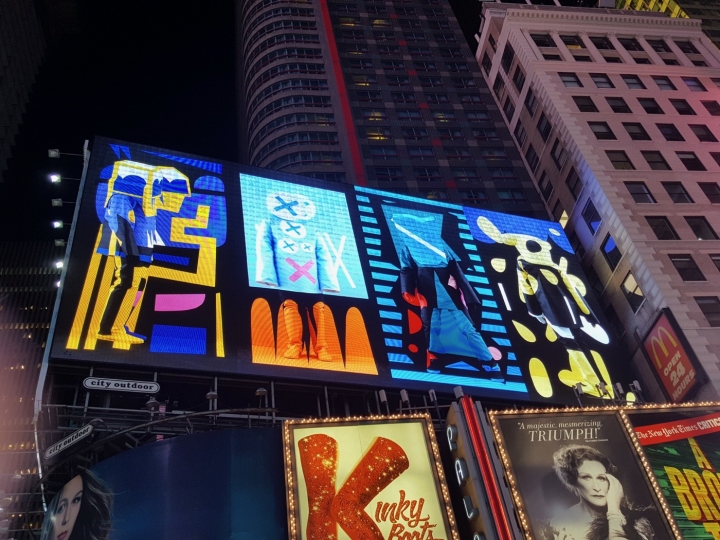 Brian Bress, Consonance and Dissonance in Four Parts for Times Square, in Times Square for Public Art Fund, image: hyperallergic
Recently Seph Rodney wrote for Hyperallergic about the Public Art Fund’s Commercial Break series, which places “interruptions” by 23 artists within the advertising programming of large-scale public screens in NYC. The project ended last weekend, but from Rodney’s account, you probably wouldn’t have noticed either way:

the project’s images are not so much a break as a pause — in some cases, by my count, a four-second interlude in which I’m not even sure what I’m looking at and not sure it’s all that different from what came before and what comes after.

It turns out to be difficult for an artist to create a successful art experience entirely within the visual context of a cacophonous commercial cityscape.
Rodney cites several historical antecedents, including Marilyn Minter and Chris Burden’s TV commercials, Creative Time & MTV’s artist spots in the 80s, and PAF’s own Messages To The Public (1982-1990), which inserted artist messages on a billboard in Times Square. Oddly, there’s no mention of Creative Time’s 59th Minute (2000-07), which did the same thing on the same spot, but with the new screen sponsor, Panasonic. 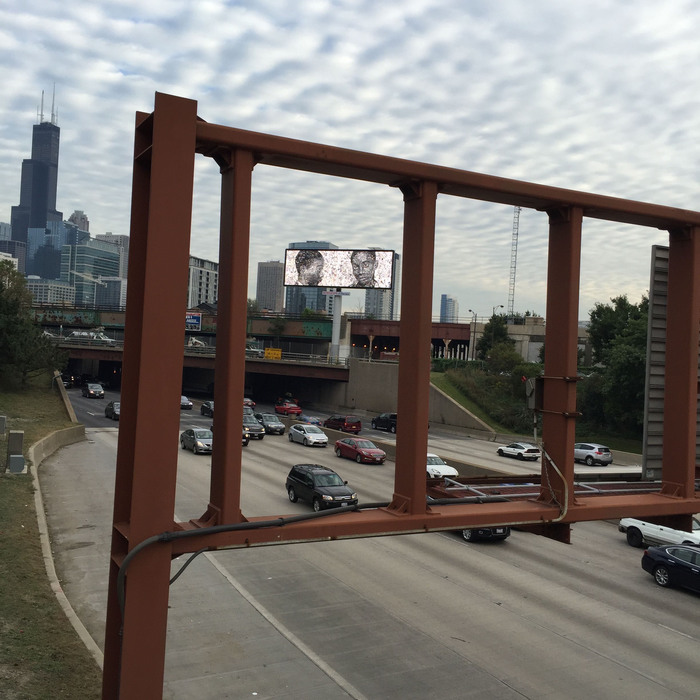 Vik Muniz, George Stinney, Jr. (2016), seen on a billboard for OVERRIDE, Expo Chicago, image: Meg Handler/Artnews
Context is hard anyway, but advertising is especially unforgiving. It all reminded me of the problematic billboard Vik Muniz made last year for Override, the public art program of Expo Chicago. Dushko Petrovich dug into it for Art News. Everyone who ever contemplates making or curating ad-related art for the public sphere needs to read about this mess.
Expo Chicago had invited several artists to submit images of works to be broadcast in rotation on electronic billboards around the city during the art fair. Muniz’s George Stinney, Jr. was a still photo from a video piece he’d made in 2015 that told the story of the youngest person ever executed in the US. That moving backstory was lost, though, to passersby who just saw the mug shot of a 14-year-old African American boy flash across a billboard.

None of the Override works were presented with any kind of introduction or identification to distinguish them as art. This lack of framing allowed the other works their surprise and titillation. But with the Stinney mugshot, mystery presented a problem: if viewers didn’t know it was art, how were they supposed to know it was a critique? What did it mean to see this image without preparation or context?
Thousands of random people were seeing it all over Chicago, but there was no way to identify these unwitting viewers, much less talk to them.

Well, Facebook. Dushko spoke with Chicago residents who were baffled, disturbed, and angered by the Stinney image; it didn’t help, but it’s worth noting that this sounds very close to Muniz’ own reaction when he first discovered Stinney’s story.
In 2010 I said that Google’s nascent AdWords-style market for buying TV commercials should be a boon for artists. “We’re all Chris Burden Now,” I said. Well, I was wrong, and it’s probably for the best that we all didn’t take my advice, because the blunders would have been off the hook. But if you’re going to make ad-related public art, just give it some thought, mkay? It’s tricky in the best of times, and these are not those times.
Aiming to Disrupt Ads in New York City, Artworks Instead Blend In [hyperallergic]
In the Context of No Context: A Digital Billboard in Chicago Raises Questions About Art in the Public Sphere [artnews]
Previously, related: We’re All Chris Burden Now
Starting With Chris Burden’s TV Ad, Through The Night Softly