It’s obvious to see how entertainment product has been superseded by reality since September 11; movies the country may have once flocked to are now recognized as fatuous and (potentially) consigned to oblivion (or straight-to-video, whichever’s worse). Today, I was made to wonder if the same thing should or would happen to so called “fine art.” Work of artists I both like and prefer to ignore has been pushed to the fore by recent events, and it’s a challenge to see how it holds up in the order-of-magnitude harsher glare. So many things aren’t abstracts or concepts any more; what happens to art that “addresses issues” and “explores limits” once these limits have been surpassed?
This afternoon I walked to Christie’s to preview the upcoming contemporary art auction. En route, I found Fifth Avenue to be completely closed for several blocks. I figured it’s UN week, Vicente Fox is at Trump Tower, that kind of thing. It turned out to be the funeral service of Donald Burns, the Assistant Chief of the NY Fire Department, held at St Patrick’s Cathedral. Nearly a thousand men and women in dress uniforms were standing at attention in the middle of the street, forming a line two blocks long and three to ten officers deep. [note: here is an image from a service one day earlier.] No one made a sound, including the spectators. Stores silenced their music. Burns’ casket and procession had just passed into the cathedral. After several minutes, the officers snapped to attention and began to file into the church. Two months did not diminish the overwhelming sadness and sense of grief the scene evoked. 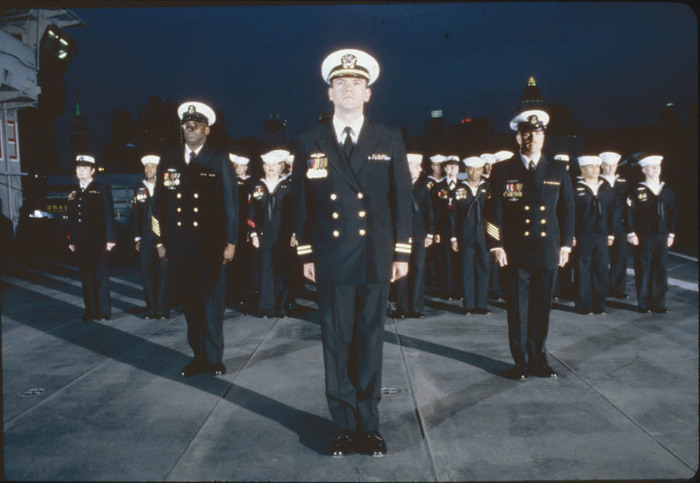 Vanessa Beecroft, The Silent Service, 2001, image via publicartfund.org
It also made me think of the work of Vanessa Beecroft, including a performance she staged in April 2001 on the Intrepid. Here is a photograph derived from the event. Especially when considered in concert with her earlier work, this seems almost as empty and wrong as a Schwarzenegger film. The emperor has no clothes, indeed.
At Christie’s I saw several monumental photographs by Andreas Gursky, whose work “presents a stunning and inventive image of our contemporary world,” according to MoMA’s curator, Peter Galassi. From the first week after the bombings, when I was in full CNN burnout, I wanted writers’ and artists’ perspectives, not Paula Zahn’s. The scale of the debris, the nature of the target, even in wire service photographs, it called for Gursky’s perspective to make some sense of it, perhaps. As it turns out, he was grounded in Los Angeles, where he’d been traveling with (and shooting) Madonna’s concert tour. The other end of the spectrum, it seems, now.
Irony and knowingness doesn’t work; sheer aesthetic, devoid of context or emotion doesn’t work; stunning monumentalism rings a little hollow. On the other hand, sentimentality, baring-all emotionality, sympathetic manipulation is even worse. What does it take to make meaningful art now? If it weren’t nearly 2 AM (and if I had any answers), I’d keep writing… 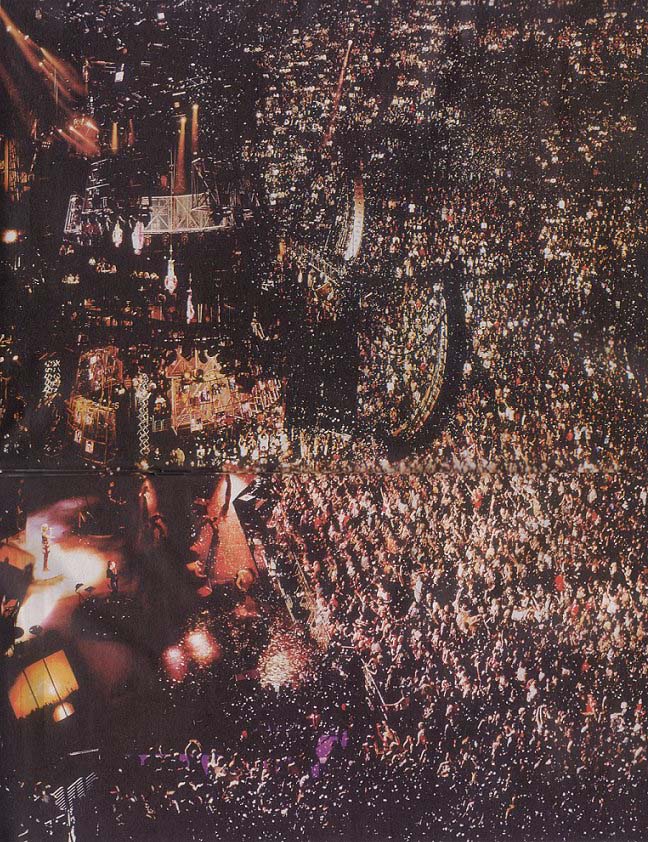 [added 18 Feb 02: Here is Gursky’s photo from the 13 Sept. LA Madonna concert, which was unveiled at the Centre George Pompidou in Paris on 13 Feb. This has become one of the top five searches for my site.]