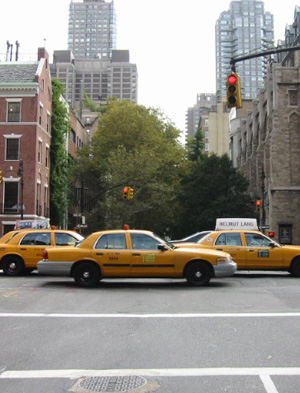 Thinking about Koolhaas’ Delirious New York again. This 1978 book, billed as a “retroactive manifesto,” tells the story of Simeon deWitt, Governeur Morris and John Rutherford, who boldly mapped out the Manhattan Grid in 1811. “…Each block is now alone like an island, fundamentally on its own. Manhattan turns into a dry archipelago of blocks.” The grid set the terms for Manhattan’s future and foreordained–according to Koolhaas–NYC’s vertical development (ie., the skyscraper). Apex Art had an interesting exhibit in 2000, “Block,” which featured Austrian architecture students’ responses to what Koolhaas called “Manhattanism.”
My street was barely a twinkle in deWitt & Co’s eyes then. In fact, the two buildings above both date from the 1920’s, when Park Avenue got its first real upgrade (from putting the NY Central railroad below grade. It’s the train to New Haven, you know). But like the rest of Manhattan, it’s character is inexorably derived to the grid. But not in the way Koolhaas thought. It’s the street, not the block, that’s really wonderful. On approach my street’s most interesting feature is the forest-dense trees that fill the space between the blocks.
John Cage was interested in the spaces between, whether between sounds or between notes or text on a page. It’s one of the reasons I wanted to use Cage’s music in Souvenir (November 2001). And Gustavo Bonevardi, a creator of Towers of Light (a project which played a role in my writing Souvenir and which has an indirect reference in the movie) said of it: “…in effect, we’re not rebuilding the towers themselves, but the void between them.”