Inspired by Tyler@Modern Art Notes’s to-bid-on list for the upcoming contemporary art auctions. I don’t think I’ll be bidding against him on anything, especially now that he’s lining his pockets with all that ArtsJournal loot. Too rich for my blood.
But a flip through the catalogues turned up at least one must-get work. If Sotheby’s estimates are right for this storyboard Robert Smithson made for his Spiral Jetty movie, I may need to talk discreetly to someone about the street value of a small, cute, baby girl. She’s very advanced for her age and sleeps through the night. 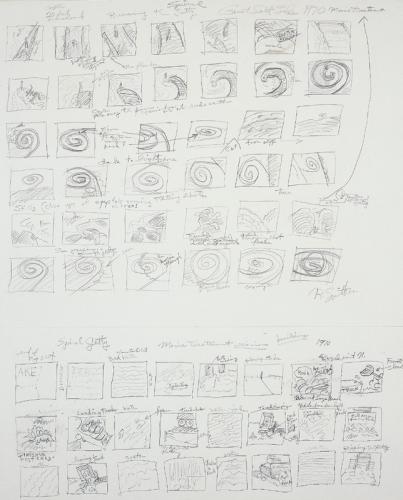 “Smithson equated film stips to historical artifacts trapped in frames, with the movie editor acting as a paleontologist in reconstructing the whole. Smithson wrote ‘The movieola becomes a “time machine” that transforms trucks into dinosaurs.’ In its storyboard format, this detailed drawing by Smithson embodies his notion of historical evolution, fragmented over time, like pages torn from a book and scattered – a scene he enacted in the realized film of Spiral Jetty.”
Related: Smithson on the Jetty and geocaching