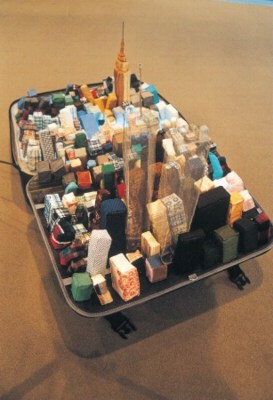 Beijing-based artist Yin Xiuzhen’s Portable Cities series are models of cities inside suitcases, made using the old clothes that city’s residents. In her practice, she explores issues of globalization and homogenization, but also memory and transience.
In a way, her work reminds me of the nomadic Japanese artist Tadashi Kawamata, who constructs temporary structures, favelas, and whirlwind-like vortices out of scrap wood and junk he collects around the city. While they exist, they put into play issues of development and destruction and (im)permanence.
Anyway, Yin’s sewn suitcase version of New York City from 2003 includes a shimmering, ephemeral version of the World Trade Center made out of what looks like mesh or organza or something. It’s really quite nice.
via Regine, who has some links to Yin’s work at the Sydney Biennial last year. Yin was also in “How Latitudes Become Art” in 2003 at the Walker Art Center. Her NYC gallery is Ethan Cohen Fine Arts.