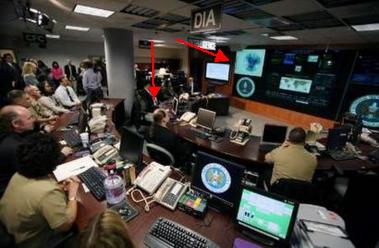 Gotta admit, the rather mundane, unimpressive visuals of the NSA’s Threat Operations Center are a boost to the secretive agency’s credibility. The place looks like utilitarian Government, right down to the bald-ponytailed sysadmin on the front row. 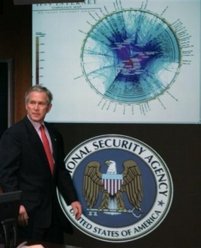 The TOC had enough wallscreens plotting enough suitably important-looking, real-time metrics that the WH advance team only needed to dress a media meeting point for GWB–which turned out to be a hallway. 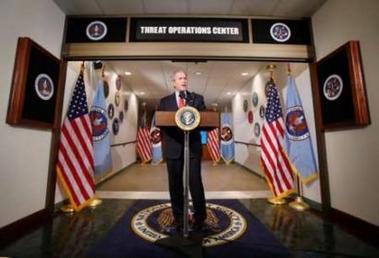 Looks like the doors were taken off their hinges, and the transoms were filled with blackout WHP graphics. Other than that, Sforza’s lighting buddy Bob DiServi swapped out a few floodlights to fill out the back, and that’s it. All in all, very narrowly focused, limited scope, and only what’s absolutely necessary. [which, conveniently, is identical to today’s message]. And the whole thing was authorized by the 9/11 congressional resolution.
A bonus set dressing tip: How do you get the flags to furl just so? A wire hanger, bent into a diamond and duct-taped to the flagpole underneath.
images: reuters/todd black; ap/evan vucci via yahoo