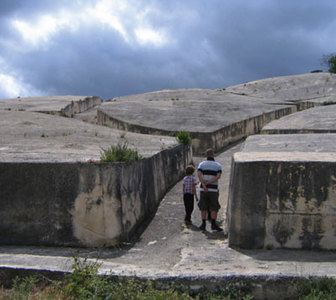 Like Pompeii in reverse, Gibellina has been remembered by its ghost-like burial instead of an unearthing.
In 1968, an earthquake devastated villages throughout the Belice Valley of western Sicily. The Italian government’s incompetent response to the disaster and the corruption that absorbed rescue & redevelopment funds turned “Belice” into a cautionary touchstone of Italian politics. It’s a scenario that might resonate today, even. In the United States. And/or in Iraq.
Anyway, in the mid-80’s, artist Alberto Burri proposed a memorial to victims of the earthquake. His plan: encase the ruins and detritus of the abandoned hill town of Gibellina in concrete, leaving the roads as a solid, labyrinthine palimpsest of the village’s public spaces. [The whole town had been rebuilt and relocated closer to the freeway soon after the earthquake. No preserve-or-rebuild debates there.] 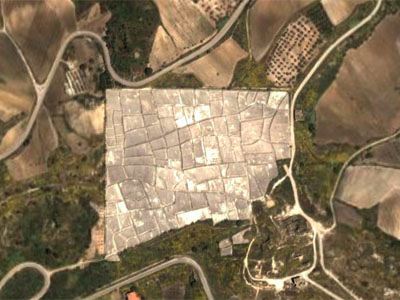 The remarkable thing: the memorial was built. Cretto is now a 20+ acre piece of mesmerizing land art, the pathways of an entire town petrified in brutalist, post-minimalist concrete. Now, of course, in 2006, it looks like Peter Eisenman’s Berlin Holocaust Memorial, but with content. The other thing it reminds me of is an old NYT Magazine article [date? who knows?] about the challenge of designing effective warning signs for a Nevada nuclear waste dump. To get the “Keep Out” message across 10,000 years from now, someone suggested paving a giant desert quadrant with spiky black stone, which the heat alone would render nearly impassable. Haven’t heard much about that since.
Other things I haven’t heard: anyone–even the memorial experts–discuss Burri’s work in relation to the World Trade Center site, or even in the larger contexts of the evolution of memorial design, much less of Land Art. What gives?
Aleksandra Mir mentioned Cretto in her top ten list for this month’s Artforum [artforum]
Cretto [archidose talked about it, though. twice.]
09/2010 UPDATE Google Maps now has higher res images, and Street View. of BF Sicily.