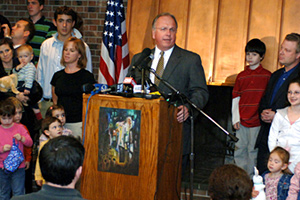 UPDATE: the video’s been removed from YouTube. Still shot via salon
Tom Reynolds, chairman of the National Republican Congressional Committee ignored one of the cardinal rules of stage performance: never appear with animals or small children.
I don’t know what Reynolds was saying; I couldn’t stop watching the Sforzian Backdrop of squirming children. Also, I had the sound off. But I do know what he wasn’t talking about: anything about the Mark Foley scandal that might make the little ones uncomfortable. Which is exactly why he trotted them out to this press conference.