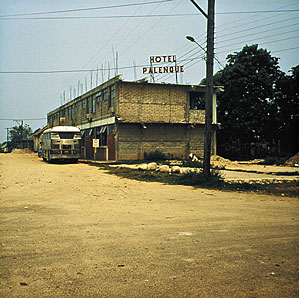 Curator Nancy Spector described Robert Smithson’s Hotel Palenque, which the Guggenheim acquired in 1999 from the artist’s estate [controlled by his widow Nancy Holt and represented by James Cohan Gallery] this way:

Hotel Palenque perfectly embodies the artist’s notion of a “ruin in reverse.” During a trip to Mexico in 1969, he photographed an old, eccentrically constructed hotel, which was undergoing a cycle of simultaneous decay and renovation. Smithson used these images in a lecture presented to architecture students at the University of Utah in 1972, in which he humorously analyzed the centerless, “de-architecturalized” site.
Extant today as a slide installation with a tape recording of the artist’s voice, Hotel Palenque provides a direct view into Smithson’s theoretical approach to the effects of entropy on the cultural landscape.

Smithson’s lecture combines deadpan delivery with absurdist architectural/archeological analysis of a contemporary ruin, a critique–or a spoof–of the kind of academic jargon-laden travelogue usually reserved for slideshows of “real” architecture like the nearby Mayan temple complex.
The lecture is available in several formats: the Guggenheim version was included in the recent MoCA/Whitney retrospective; an illustrated transcript was published in Parkett #43 in 1995; and the incomparable UbuWeb has a 362mb film of the 1972 event for download. [update: uh. ] There was even a “cover version” “performed” by an artist last year in Portland.
But re-viewing the “original” really makes me wonder. The differences between various posthumous incarnations and interpretations of the “Hotel Palenque” lecture seem significant enough to make me question what Smithson actually intended for the lecture, how it was originally received, how it has been contextualized today, and if it is even a “work” at all.
The medium through which art is experienced inevitably influences its perception and interpretation. For an entire generation while it was submerged, the Spiral Jetty “existed”–or was experienced–only through memory, history, text and photo documentation, and, importantly, the artist’s own “making of” film. Once the actual work started re-emerging in 1993-94, its experiential aspects have shifted; now The Visit, the spatial situation, environmental conditions and entropic forces at the site, and the interplay between the Jetty‘s manifestations come to the fore.
Similarly, Palenque is consistently described in hindsight, through the sophisticated conceptual contstruct of Smithson’s writings, but to watch it, Palenque actually sounds like a dorky, rambling joke, more parody than pronouncement. The only real jargon he uses are “situation” [in the architectural sense] and “de-architecturization.” Otherwise, the real/only humor comes from the juxtaposition of his blandly weighty assertions of importance and photos of torn plastic roofing, piles of bricks, and a room propped up by shaky-looking poles [“this is how we approached the site; our car is right there, see between those two columns?”] 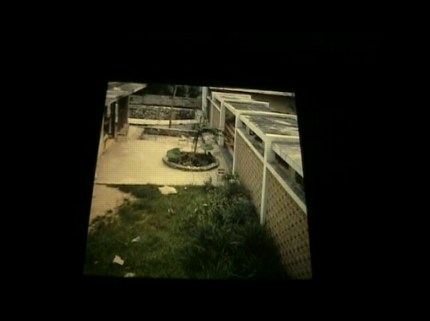 The lecture is described as funny, but the only laughter I could hear sounded nervous, or at least tentative. And without knowing anything of how the lecture came to be, and how it was received and reviewed at the time, I can’t help but imagine that some people, like Smithson’s hosts, or his audience, might have felt like the butt of some smart-alecky New York artist’s practical joke. Overall, I guess I find it hard to reconcile Smithson’s sophomoric performance with his hallowed reputation; the lecture fits more neatly with his early, critically challenging “high school notebook doodle” drawings of busty angels than it does with his heavily theoretical Artforum articles.
[It’s worth pointing out that Smithson’s photo/slides, on the other hand, feel very resolved and coherent. I was repeatedly reminded of Gabriel Orozco’s photos of “found” sculptural scenarios and moments, as well as of Smithson’s own Passaic series and other photographs. We have a favorite photo, a top-down shot of a pile of bricks, that he did after returning from the Yucatan; the man does have a way with rubble.]
But the most problematic issue about Palenque could be a non-issue for almost any conceptual artist, but it seems paramount given Smithson’s own ideological concerns with the gallery/museum space and system: to what extent should the lecture be considered “performance” or a “work of art” itself? The Guggenheim’s version of Hotel Palenque consists of a slideshow and an audiotape, which plays in polite form in a museum gallery.
But before/besides that incarnation, the lecture “existed” [or was experienced] as a filmed version, made with a handheld camera seated somewhere in the crowd in Salt Lake City. Smithson himself is off camera, and several times, the slides themselves are, too. The film is a bootleg only to the extent Baltimore artist Jon Routson‘s self-consciously askew video recordings of movies are, which is to say, “not at all.” The amateurish, sometimes forgetful framing and the handheld jitters heighten the experiential, audience perspective. There’s one passage where the camera bobs up and down in synch with its operator’s breathing. These are all central, even overwhelming, elements of the Palenque film, and they’re utterly absent from the “institutionalized” version, just as Smithson’s delivery is lost in the Parkett transcript [a version which no one would mistake for anything but documentation or reportage.] It’s enough to make me wonder just what the Guggenheim bought–or just what the Smithson estate sold–with Hotel Palenque which, by 1999, had to be one of the few significant “pieces” or, less problematically, holdings, left in the estate.
The Guggenheim also bought, at the same time, nine slides of Yucatan Mirror Displacements, iconic images of landscape interventions which Smithson made on the same 1969 trip. But these slides–which illustrated an Artforum essay and are widely reproduced in print–have never existed to my knowledge in artist-sanctioned formats like traditionally editioned prints. I’d be very interested to see documentation or scholarship on this question–which is also a fancy way of saying I have no idea or direct knowledge at this point–to see just how closely Smithson’s definition of defined, purchasable work jibes with notions operative in 1999 among art dealers and museum acquisition committees.
Because there have already been plenty of cases where Smithson’s ideas, his works, and his estate’s interpretations of them sometimes seem out of synch. Had Smithson not died suddenly and tragically the next year would this offhand-seeming ramble be treated with even a fraction of the reverence it has received? And if there had been more sculptures and clearly identifiable “work” to sell in the estate when Smithson’s star re-emerged in the late 1990’s, would Hotel Palenque ever have made it out of the archives and into a major museum’s collection?
Previously: UT gov’t decides to clean up the Jetty site
Nancy Holt floats the idea of “restoring” the Jetty
“The Spiral Doily”: What if sprawl is the real entropy?
Other Smithson-related posts on greg.org
Elsewhere: Brian Dillon’s appreciation of the lecture as artform in Frieze