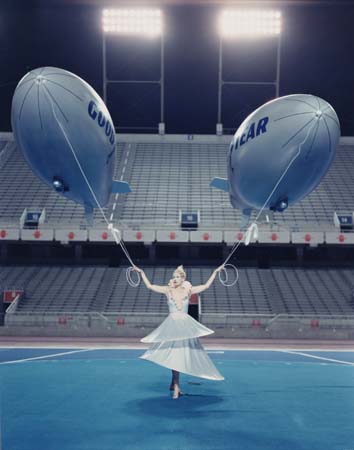 And by ‘out there,’ I mean in North Korea. And by ‘a Cremaster,’ I mean Cremaster 1, Barney’s foray into Busby Berkley stadium spectacle. 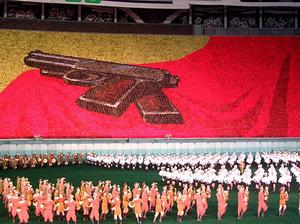 NK’s Arirang Festival has choreographed logistics to make even Barbara Gladstone blush [well, maybe]: 100,000 performers training for a year…actually, I bet they’re pretty cheap.
With stuff like this going on in the world, once-quixotically grand projects like Cremaster seem almost quaint. It’s like how almost any earth art you name pales to the inadvertent aesthetic alterations of the US Army’s Dugway Proving Ground.
The interesting/odd thing is how undercovered the Arirang Festival appears to be, especially given the Great Leader’s supposed fascination with film. The event remains a totalitarian spectacle intended to be experienced live.
There are only a few clips on YouTube [some are at everyoneforever, where this great photo came from as well]. Add live event producer/director and publicist Kim Jong Il’s “to kidnap” list, I guess.