Buckminster Fuller wha?
It was the photo caption in the photo spread of the Foreign Office Architects country house project in the November 2007 World of Interiors on the coffee table. I snapped a quick phonecam photo, thinking I’d look it up later and find some random product Fuller had licensed, and then I’d pick one up on eBay some day, but no. Oh, no.
Now I have to track down this one, the only one, a wedding present of some renown. 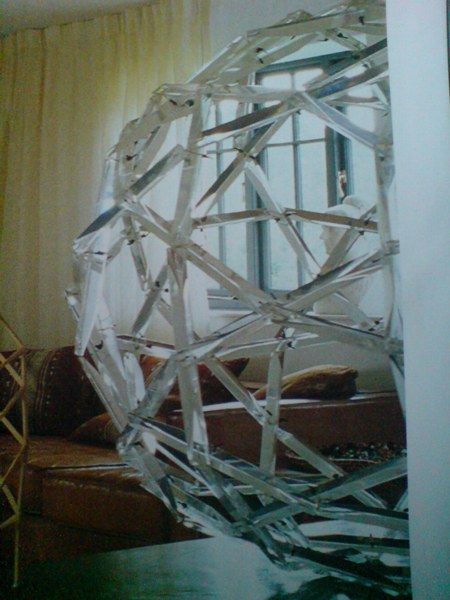 From Maggs, the rare books and art dealer who apparently sold the Margaret/Snowdon Fuller Chandelier some time in the Internet era [I’m guessing around 2004] to its current owner [an art dealer, so there’s hope, at least]:

Designed by Buckminster Fuller, and made by James & Gill Meller as a wedding present for Princess Margaret and Lord Snowdon.
A basketweave geodesic sphere, of perspex (aka lucite) prisms wired together with steel fishing line, served with crimps and electrical terminals, the crimps threaded into cut out venturi.
89 cm in diameter, just over ten kilograms in weight.
Attractive and practical [!?], this is a unique three-dimensional souvenir of the great maverick philosopher-inventor Fuller and a remarkable manifestation of a period when Britain, against the odds, embraced and integrated the ideas of this most awkward and inspirational member of the American avant-garde into a new school of radical architecture…

Snowdon, it will be remembered–or in my case, learned–collaborated with Fuller supporter Cedric Price and the engineer Frank Newby on the tensile architecture of the London Zoo aviary. Architect James Meller built the thing with prisms “from The Perspex Shop” and “eighty pound plastic-coated trace wire) and crimps from Farlows in St. James’.”

Geometrically speaking the sphere is a truncation of a truncated icosahedron, a form which results in a polyhedron with 12 pentagons, 20 hexagons, 60 triangles, 90 vertices, and 180 edges. It works tremendously well as a chandelier, as the Perspex components function as refracting prisms and produce subtle rainbow coloured patterns. It is currently suspended on a simple rope harness, with no light source supplied.

Or at least it was. Now it’s sitting on a table in what used to be the cheesemaker’s living room. If anyone has a fuller [heh] image of the chandelier, I’d love to see it. And if you have a royal, hand-wired, geodesic chandelier you’ve grown weary of, do call.
A ? THE! A Geodesic Chandelier [maggs.com]