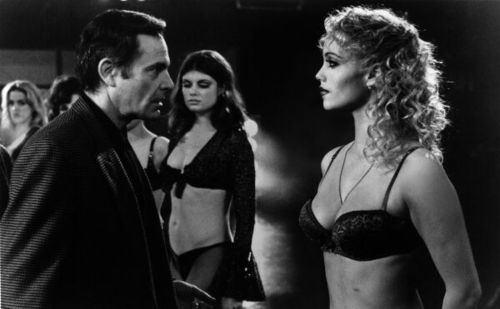 Choire’s interview with Elizabeth Berkley reminded me of some unfinished Showgirls business here on greg.org.
Back in 2002, right after Beyer Blinder Belle released the first, banal master plans for the rebuilding of the World Trade Center site, a parody critique circulated in the style of Herbert Muschamp, then the architecture critic for the NY Times. Finally, here it is:

A Critical Appraisal
Special to The New York Times
Striding down the row of design proposals for the World Trade Center site, balefully eyeing each inert mien and artificially enhanced plan, I was reminded of the scene in Showgirls where the choreographer grimly surveys his topless charges. Flicking a feather across their assembled nipples, he scolds, “Girls, if you are not erect, I’m not erect.”
Ladies and gentlemen, I’ve seen the master plan proposals from the Lower Manhattan Development Corporation, and, to put it mildly, I’m not erect.
My heart sank as I watched John Beyer of the architectural firm Beyer Blinder Belle attempt to describe these hapless proposals. I was painfully reminded of another much more casual presentation one glorious autumn on Capri. The visionary Rem Koolhaas was holding forth on urban planning, shopping, life, and the smell of fresh basil. Wearing beautifully tailored trousers and a tight, cropped black top (need I add it was by Prada?) he gestured energetically as he spoke. With each gesture, his shirt rode up ever so slightly, revealing a tantalizing sliver of tan, taut tummy.
It is this kind of energetic gesture that those of us who care about contemporary architecture hunger for so desperately. Beyer Blinder Belle’s work is occasionally competent: certainly their by-the-numbers renovation of Grand Central Terminal pleases the hordes of moronic commuters who stream through it each day, but it will come as no surprise that this recidivist pile of marble is of little interest to the infinitely more important audience of attractive young European architectural students who make pilgrimages to our city each year and can barely choke back their tears of disappointment. John Beyer, whose exposed torso would be unpleasant for even the more adventuresome New Yorker to contemplate, must shoulder the blame for this catastrophic failure.
It is now time to list these names: Frank Gehry, Peter Eisenman, Zaha Hadid, Elizabeth Diller and Ric Scofidio, Tod Williams and Billie Tsien, Steven Holl, and, of course, Rem Koolhaas. There.
Is a little daring, a little excitement, a little sexiness too much to ask for on this sacred site? Lower Manhattan Development Corporation chairman John Whitehead and New York governor George Pataki would do well to rent a videotape of “All About Eve” and examine Bette Davis’s behavior before the big party scene. Her character Margo Channing reaches into a candy dish and hesitates again and again before finally popping a candy into her mouth. This tantalizing motif “impulse, surrender, gratification” is the central one of the twenty-first century. It alone must provide the ideological blueprint for all architectural work being done anywhere in the world, including lower Manhattan. If this fails to make sense to the theme-park obsessed corporate apologists for big business, so be it.
In the interest of full disclosure, my proposal for the site will be revealed at a time and place of my choosing. Fasten your seatbelts, New York.

Ignore, if you can, the glaring error that Muschamp would never have made: the choreographer used ice cubes, not a feather. The irony is that not only did Muschamp’s writing the last few years before his too-early death seem to cut loose, as if to meet his parodists in the sky, the fake WTC critique turned out too true by half: thanks to a sycophantic 1776 minstrel show from Daniel Libeskind and a chorus line of starchitects flashing their tits, the Port Authority’s original proposal is right on track.
[via mouthfulsfood]
Previously: Surely, Hordes of Showgirls-Googling Architects Can’t Be Wrong?