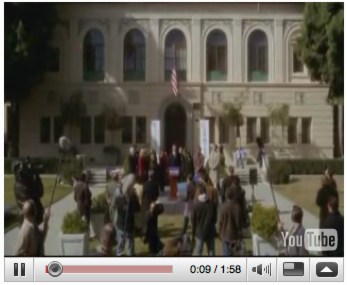 “This is the place that matters.” And this just gets better and better. Walter Reed Middle School served as the backdrop for the presidential candidacy of Democratic congressman Matt Santos–as played by Jimmy Smits on West Wing.
West Wing producer-writer Eli Attie told the Guardian in February that the Santos character was based on Barack Obama:

“I drew inspiration from him in drawing this character,” West Wing writer and producer Eli Attie told the Guardian. “When I had to write, Obama was just appearing on the national scene. He had done a great speech at the convention [which nominated John Kerry] and people were beginning to talk about him.”
Attie, who served as chief speechwriter to Al Gore during the ill-fated 2000 campaign and who wrote many of the key Santos episodes of the West Wing, put in a call to Obama aide David Axelrod.
“I said, ‘Tell me about this guy Barack Obama.'”