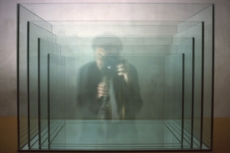 For their first show in 2005 Orchard, the collaborative gallery/exhibition space on the Lower East Side, recreated Dan Graham’s 1966 Project for Slide Projector:

Project for Slide Projector was presented as a set of instructions for an experimental work and a theoretical text that interrelated minimalist ideas of three-dimensional work with the conventions of photographic representation. Graham published his text in no less than three versions in 1969. In the period 1969- 70, a student of Graham’s at the Nova Scotia College of Art and Design in Halifax realized a set of slides for the work with Graham. To execute the piece, a rectangular structure of four glass panes with an open top and a bottom pane made of mirror was constructed, along with four glass boxes designed to nest within the first box. To create the photographs, a 35mm camera was placed close-up and parallel to the rectangular face of the large box so that the edge of the photograph and the edges of the box align. The camera operator shot each side of the glass and mirror structure, moving clockwise, and did the same as each additional box was added within the larger structure. The resulting set of twenty slides is duplicated in order to produce a set of slides that arrays the images in a forward and back-ward motion as they project.
Over the carousel projection of 80 images, the degree of reflectivity and spatial ambiguity of the mirror space Graham conceived moves cyclically and inverts, building and un-building. Located somewhere between the materials and experiences of sculpture and photography though essential to neither, Project for Slide Projector captures the experience of walking around a sculpture, that is, the spectator’s perception- a site for significant artistic experimentation in the sixties. Project for Slide Projector can also be read as an image of the experience of looking at sculpture via its photographic reproduction, a subject artists such as Robert Smithson explored in visual work, exhibitions, and writing.
Graham wrote: “The sculpture is the photographic residue, and effect of projected light. What is seen must be read in terms of the conventions of still photography: two-dimensional objects which appear at once solid and also as transparent, and which function simultaneously in two entirely different planes of reference (two-dimensional and three-dimensional).” (Films 1977) 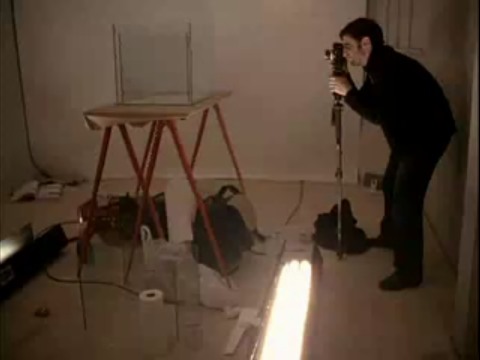 Meanwhile, for his film project Orchard 2, Jeff Preiss created a flickering, Muybridge-like animation documenting the process of shooting a new set of slides for Graham’s piece. All that’s left is to download Preiss’ film to your iPhone and play it while you’re watching Project for Slide Projector in a gallery. I miss Orchard.
Part Two | Orchard [orchard47.org]
Photographing PROJECT FOR SLIDE PROJECTOR by Dan Graham at ORCHARD [jprq on youtube]