Over the holidays, I taped an interview with my great uncle Wayne. He is my paternal grandfather Champ’s older brother. [Yes, I did ask him about my grandfather’s name. His recollection was that my great grandfather Chester Jehiel Allen hated his own name so much, he was determined to give his kids one monosyllabic name apiece. But that’s not the point right now.]
Wayne told me as a young man growing up in central Utah, my grandfather had worked for the Civilian Conservation Corps. The CCC was one of the most successful Depression-era jobs programs; it put hundreds of thousands of men, mostly from rural areas, to work building roads, dams, bridges and national park fixtures, and doing other construction-type projects.
I’ve been surfing around on the history of the CCC in Utah, trying to get a sense for what his experience was like. From newsletters archived by the Utah State Historical Society, it sounds like it was run in a quasi-military style, with camps and barracks and ranks; it’s hard to imagine my grandfather fitting in well. 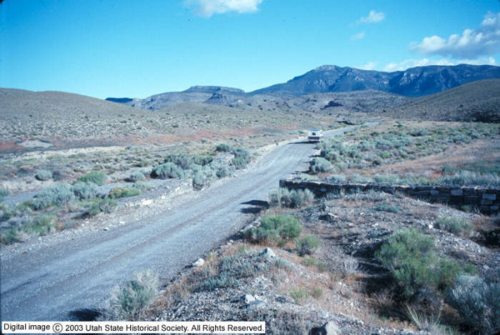 The USHS also has several collections of photographs taken by CCC members, though I couldn’t find any yet from the camps or periods Champ served. The photos show camps or the projects: structures in remote desert landscapes lacking any readily identifiable landmarks. Gabions and walls and foundations of stone in the middle of the desert. Not just bridges to nowhere, but bridges to, from, and in nowhere. Some of them unexpectedly reminded me of Earth Art sculptures. 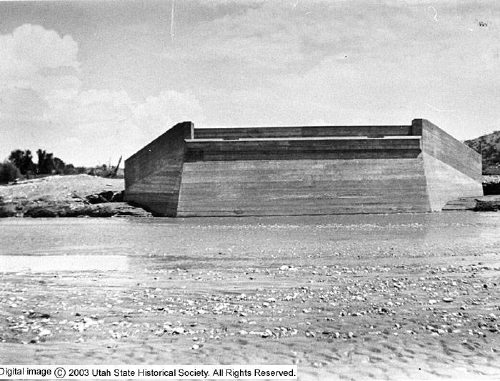 Ashley A. Workman served in the CCC for seven years, 1934-41, in ten different camps. This undated, unsited photo from his collection of “some type of CCC bridge construction project.” What else could a minimalistic geometric structure, stripped of time, place, context, and utility be but a sculpture? [here’s another view of it.] 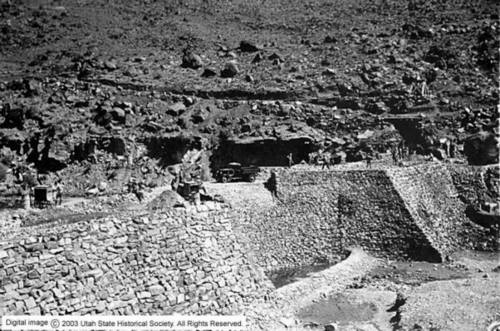 We know where Lamar Peterson took this photo, “”Dam on Santa Clara River, Shivcoit Indian Reservation,” [actually, I believe that should be Shivwits, a band of the Paiute tribe] but it still looks like it could be part of Michael Heizer’s City.
I have no idea what Heizer, Robert Smithson, Walter deMaria, or any other earthworks artists thought or said about projects like the CCC’s. Maybe nothing at all, ever. We see these historical works from the other end of the temporal telescope now, but did they look different to people encountering them for the first time in the 1960’s and 70’s?
When these artists began conceiving massive sculptural interventions in the remotest desert landscapes they could find, the country was only a generation removed from the Depression. I expect there was a much greater general cultural awareness of the CCC and its built legacy. And then there’s the post-war construction and baby boom that saw American families taking cross-country roadtrips to national parks via new interstate highways.
If anyone’s seen Earthworks discussed well from this historical and aesthetic context, I’d love to know about it. And if anyone’s then looked even further back, with contemporized eyes, to explore the production of pre-minimalist and pre-Earthwork objects, I’d definitely love to know about it, too.
Images 2 of 1455 CCC photos in the Utah State Historical Society Collection [lib.utah.edu]