So I’m finally going to make my Enzo Mari autoprogettazione table from Ikea components. A publicist from Ford had offered a Flex station wagon for a road trip, and last weekend, I took them up on it. Which meant I could bring back the 89-in pieces of wood I’d scoped out. So I did. Next I will cut and finish the pieces. Then I will assemble the table.

[Background: Last summer, I wrote about wanting to make an Enzo Mari dining table out of 1-by pine lumber, which Mari chose in the early 1970’s because it was the humblest, most ubiquitous, undesigned, standardized material around. It was manifesto furniture, a counter to both industrial-scale production and the fetishization of luxury design. Well, we all know who won that fight.
Instead of my original plan, which was to follow the letter of Mari’s instructions, and find some insanely rare, beautiful pine lumber cut from 500-year-old trees that have been submerged on a riverbottom for 200 years, I decided to go with the spirit. The character-free pine lumber on every corner today is Ikea furniture. So I combed through Ikea’s entire product line to find the individual components that were closest in dimensions and finish to Mari’s original low-grade pine boards. The result: the Ivar shelving system.]
One of the key principles of Mari’s autoprogettazione designs is that they required no complicated woodworking, just a minimal number of simple, straight cuts and some nails. As I was studying the Ikea parts and calculating the cuts and reworking necessary to fit it to Mari’s exact specifications, the process was becoming quite complex and forced, and I realized this entire point was being lost. 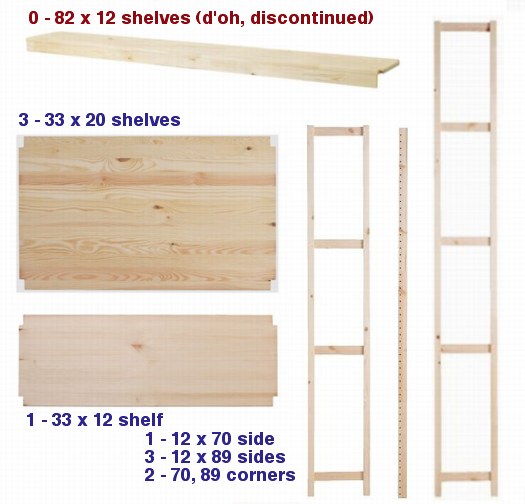 So I began seeing the Ikea lumber sui generis: it is not a source of raw material, it is the raw material. An Ikea Mari table would look like what it is, I figured. So I decided to adapt Mari’s table’s dimensions to the standardized dimensions of the shelf components.
I’d heard from other folks who built an EFFE table that the 1×2 boards don’t feel that sturdy for table legs. Most Ivar boards are even thinner, so I decided to use the thicker, square corner posts as legs. Rather than cut them down to boards and reassemble them as a 14-in. truss, I decided to leave the pre-assembled 12-in. Ivar sides intact, then double them up to use as trusses. All these minor changes in dimension and proportion rippled through Mari’s original design, requiring almost every cut to be recalculated.
Conveniently, Mari’s neat-but-arbitrary 200cm tabletop length was almost exactly the length of an 82-in. Ivar shelf with the metal bracket ends cut off. I’d just need three shelves to…whoops, in the intervening months since I began my calculatin’, the shelves were discontinued. So on the fly, I ended up buying four 33-in. wide shelves, which I’ll place width-wise to make a 72-in. long table. It’s the opposite of Mari’s long plank top, but it seems better than either a) scouring the country’s Ikeas for leftover shelf stock, or b) buying a finished tabletop, which Ikea merrily sells by the containerload.
But that means new proportions, new dimensions, and figuring out how to brace short, wide boards as opposed to long, thin ones. Which got me wondering about the table top’s functionality and stability. Do I need to end glue the shelves together for strength? Or is that kind of more involved woodworking a betrayal of Mari’s original knock-it-together concept? And what is the proper relationship between conceptual awesomeness and shitty workmanship? I know Mari’s autoprogettazione was a critique of mass production and consumption, but is it a renunciation of craft, too? If a laborer is virtuous for hammering together his own furniture at home, is he somehow less virtuous if he puts a hand-rubbed, organic tung oil finish on it?
As much as I embrace Mari’s principles and the raw elegance of his design, as I look at my pile of low-grade pine shelving leaning against the wall, I confess, I’m having a hard time giving up my desire for a sweet, luxe patina. So while I could break out my awesome new Japanese saws and pound this table together in a day–and I know it’d feel extremely Ikea if I did, and that’s tight–I can’t do it. I’m going to get all finish fetishy, and see if I can make this table beautiful as well as cool. We’ll see.
Previously: Enzo Mari x Ikea Mashup, Ch. 2: Parts
Enxo Mari x Ikea Mashup, Ch. 1: