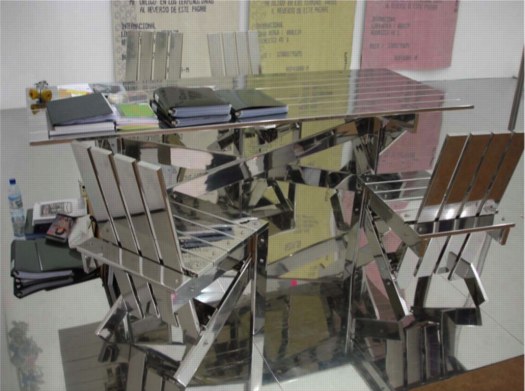 Untitled (Autoprojettazione, 1123 xE/1123 xR), 2004
courtesy kurimanzutto
As I’ve said before, the first Enzo Mari autoprogettazione furniture I ever saw was by Rirkrit Tiravanija. He had tables and chairs fabricated from polished stainless steel, which his gallery from Mexico City, kurimanzutto, showed at Basel and a couple of other fairs a few years ago.
They weighed a ton and cost a fortune–as furniture, anyway; as sculpture, they seemed like a bargain–but they looked spectacular.
Rirkrit hit a zone in his work then where he was re-creating various examples of modernistic furniture and architecture in mirrored stainless steel; there was a ping pong table; several corner assemblages using three Smithson-esque, non-site mirrors; and an entire chrome pavilion in Bilbao. The effect was to simultaneously aestheticize the original and dematerialize the substantial object on display, turn them into non-objects. Which is kind of ironic, since they’re among the most atypically beautiful works the supposedly non-object-oriented [heh] artist has made.
See another picture at kurimanzutto, slide 4 [kurimanzutto.com, image above, too]