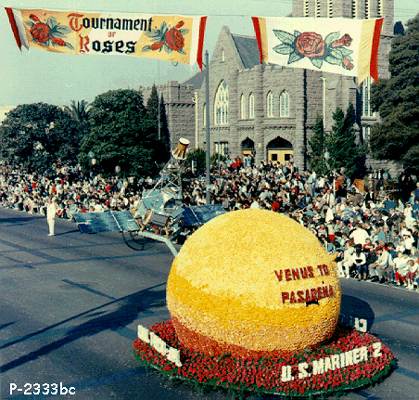 Amazing to think that all this was happening at the same time as the satelloons of Project Echo and just five years after Sputnik.
NASA Jet Propulsion Laboratory director William Pickering was the grand marshal of the 1963 Rose Bowl Parade. Behind him followed a float of the Mariner 2 space probe, which had successfully reached Venus in December 1962.
A Venus made of roses with a flower satellite probe orbiting it. And a little window cut out of Venus so the driver can see. Fantastic.
Mariner 2 Rose Parade Float [nasa jpl via nasaimages.org]