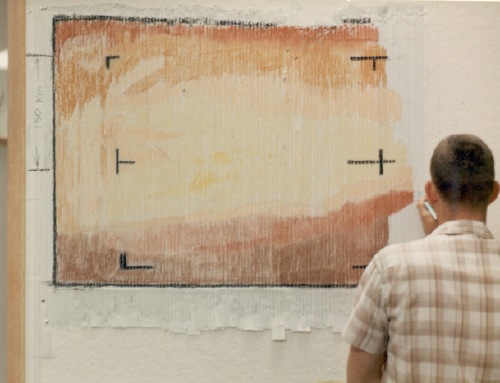 In 1965, after the Mariner 4 probe had possibly transmitted its first closeup images of Mars and in the many hours before JPL computers would finish processing that image, mission scientists were concerned about what, if anything the data would reveal.
So Richard Grumm and his fellow mission managers came upon the idea of printing out the brightness values onto vertical strips, taping them up on the office divider, and coloring each number in with pastels. Thus it was that the world’s first transmitted, televised image of Mars was drawn by hand.
That drawing, cut out of the divider, framed, and presented to JPL director William Pickering, was included in “Data + Art,” an exhibition curated by JPL educators Dan Goods and David Delgado at the Pasadena Museum of California Art, which closed in April 2009.
The closeup reminds me of Beuys: Data + Art installation shots and closeups of Grumm’s Mars drawing [directedplay.com]
The full making of story, plus additional images, by Dan Goods–AWESOME [directedplay]
Dan detailed the circumstances of the making of the drawing in the comments on Boing Boing Gadgets today. [g.bb]
The image above, “First Image of Mariner 4,” is available via NASA Images, a service of the Internet Archive [nasaimages.org]