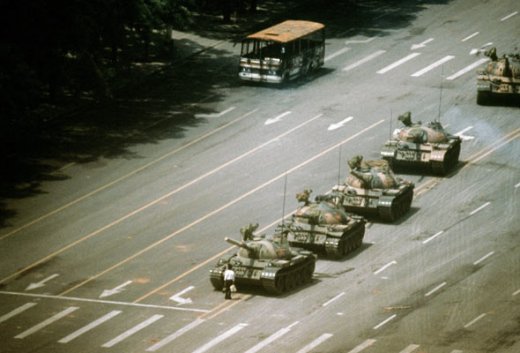 The NY Times’ Lens blog has absolutely riveting accounts of the four journalists who shot photos of Tank Man, the still-unidentified man with two shopping bags who confronted a column of People’s Liberation Army tanks rolling into Tienanmen Square on June 5th, 1989.
Because he was shooting for AP, Jeff Widener’s version got the greatest immediate distribution, but it’s arguably the lowest quality photo of the bunch. Magnum photographer Stuart Franklin’s wide shot [above] with the burned out bus has a more powerful composition. Newsweek’s Charlie Cole and Reuters photographer Arthur Tsang Hin Wah were both new to me. 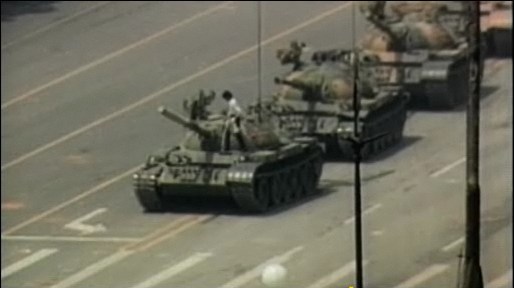 Tsang’s editors actually didn’t release his facedown photo until twelve hours later; instead, they went with his “action shot” of Tank Man climbing up onto the tank and confronting the driver. Tsang’s is the only account of the four which mentions this detail, even though they all remember People’s Security Bureau agents apprehending the man after he climbed back down. 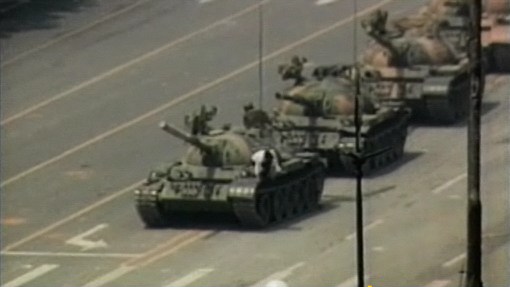 In my opinion, it is regretful that this image alone has become the iconic “mother” of the Tiananmen tragedy. This tends to overshadow all the other tremendous work that other photographers did up to and during the crackdown. Some journalists were killed during this coverage and almost all risked being shot at one time or another. Jacques Langevin, Peter and David Turnley, Peter Charlesworth, Robin Moyer, David Berkwitz, Rei Ohara, Alon Reininger, Ken Jarecke and a host of others contributed to the fuller historical record of what occurred during this tragedy and we should not be lured into a simplistic, one-shot view of this amazingly complex event.

As remarkable as these stories are–and the lengths these photographers went to to not have their film confiscated is truly mindblowing–they all ignore an important fact: the most memorable and widely seen image of Tank Man and his whole brave dance with the tank was actually TV footage.
Behind the Scenes: Tank Man of Tiananmen [nyt lens blog]
PBS Frontline overproduced a Tank Man documentary in 2006. The confrontation footage begins about five minutes in. [pbs.org, where I took the climbing images above]