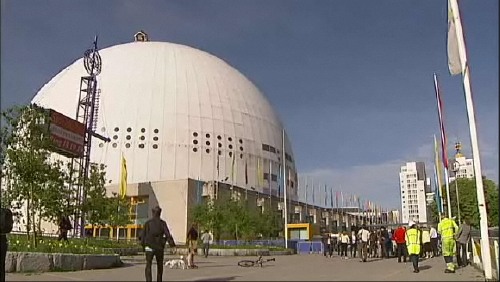 Josh Foer is on fire, and I’m like a moth to the flame. Foer’s guestblogging at BoingBoing, and is just lobbing up one crazy-awesome megasphere after another. It was his charticle in Cabinet a while back about the history of giant spheres that introduced me to satelloons in the first place.
So it’s no surprise that he surprises me again with an offhand reference to the Globe Arena in Stockholm, which is just “the largest spherical building in the world.” And it also happens to be at the center of the Sweden Solar System, the world’s largest scale model of the solar system, where Pluto is a ball 300km away.
No, the Globe, which Ericsson just paid to have renamed the Ericsson Globe, also has a small stuga, a traditional red Swedish cottage stuck on top of it for the summer.
A month ago, the Swedish artist Mikael Genberg, whose primary medium seems to be the traditional red Swedish cottage, attached one to the Globe in preparation for his much larger project, which is to dispatch a traditional red Swedish cottage-building robot to the moon in 2012, and have it build a traditional red Swedish cottage there. On the moon.
I’m not sure how this syncs with the Sweden Solar System, where I assume the 100-m diameter Globe is standing in for the sun, not the moon, but the visuals are pretty irresistible.
Sweden Solar System [atlasobscura.com via boingboing]
Ericcson Globe, aka Stockholm Globe Arena [wikipedia]
houseonthemoon.com project blog [houseonthemoon.com]
MikaelGenberg.com [insane, optimized for Netscape 4, unclickable]
Swedes sending robot to the moon to build nice little cottage [gizmodo.com]
image and video: Röd stuga på Globens topp [svt.se]