So sweet. Check out this awesome aluminum-clad house, which curator/architectural historian Erik Neil spotted yesterday on the campus of the NY Institute of Technology: 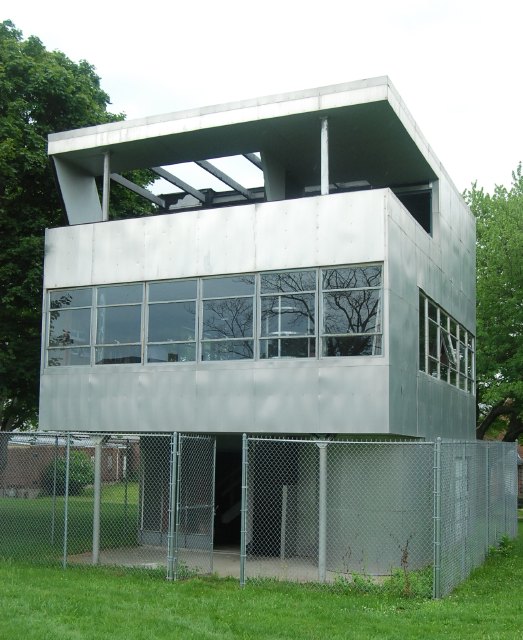 I looked it up on the Internet, and found this post, which I wrote last weekend. It’s Lawrence Kocher and Albert Frey’s Aluminaire House as it exists today, or yesterday, anyway, which is pretty damn close.
This house is completely fantastic. Who’d have thought that looking like a 1930’s industrial refrigerator would result in such wonderful architecture? Put some quilting on those aluminum panels, and it’d be like living at Florent.
Neil visited the house because he’s including it “Arcadia to Suburbia: Architecture on Long Island 1930-2010,” an exhibition on the history of modernism on Long Island set to open in January at the Hecksher Museum in Huntington.
He also pointed out that Joe Rosa, who was a key player in saving the Aluminaire House from demolition in the 1980s, included it in his 1990 monograph, Albert Frey, Architect, which I have somewhere in storage, but which I might sell just on principle because–hello–it’s like $115-$581 on Amazon right now. Crazy days.