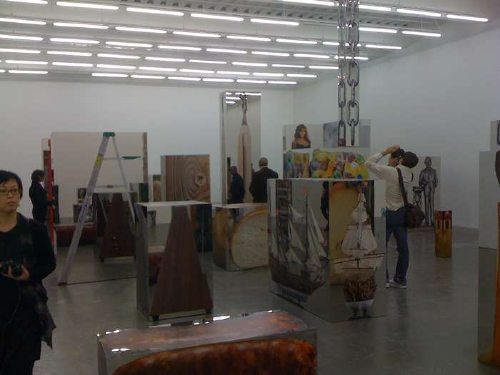 At the press preview of the New Museum’s Urs Fischer show yesterday, curator Massimiliano Gioni said that Fischer “treats reality as if it were software,” an assessment I suspect is designed to be tweeted more than analyzed.
Gioni and Fischer are entitled to use any metaphor they care to, of course, and this artist-as-reality-coder trope may be borne out nicely in the scholarly catalogue essay. But it also the kind of cross-disciplinary conceptual appropriation that leaves itself open to mockery by people who actually know what they’re talking about, like how NYU physicist Alan Sokal submitted a nonsensical paper, “structured around the silliest quotations [he] could find about mathematics and physics” made by postmodernist academics which questioned the hermeneutics of quantum gravity, to the cultural studies journal Social Text–who published it without question or peer review.
But looking at the work, Gioni’s explanation may turn out to be less deep but more valid than it first seems. The “Labyrinth of Mirrors” on the second floor, for example [above, in a photo from @artnetdotcom], is full of four-sided pictures of objects on mirrored boxes, which distort the space of the room as you walk around them. They feel like real-world approximations the XYZ-grid boxes inhabited by irregularly shaped virtual objects in Google Sketchup or the CAD/CAM programs. Which makes Fischer a user, not a coder.
Spatially, they labyrinth also gives off a bit active camo/invisibility vibe, like James Bond’s Aston Martin in Iceland, or–yes, it seems I have to go there–The Matrix.
So the world we see is just a construct, all ones and zeroes, and we’re too asleep to know it. Or the digital worlds where we increasingly spend our time–Google Earth, Halo, Second Life [oh wait, that’s right, no one actually does Second Life]–are rapidly eating away the physical world’s monopoly on reality, confounding our expectations and perceptions along the way. Maybe it’s all making too much of a throwaway soundbite. 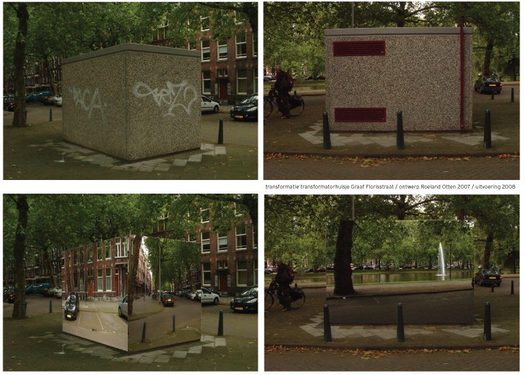 One thing I’m sure of though, is that Rotterdam architect Roeland Otten finished his trompe l’oeil Transformatie project just in time. [via]