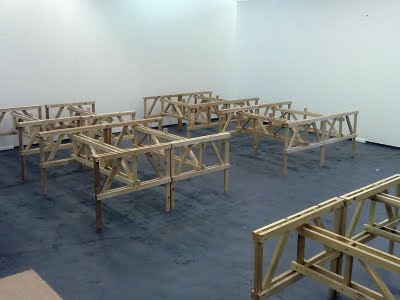 Sheesh, as if I wasn’t painfully aware of the nearly finished Enzo Mari x Ikea Mashup table sitting behind my sofa, I get this, from Peter Nencini, [above] which frankly just hurts:

A couple of weeks ago we reassembled 32 studio tables, originally built last year to Enzo Mari’s Autoprogettazione plans, published in 1974.

I’ll assume that they’re not putting twelve coats of hand-rubbed tung oil on theirs. At least I can hope my next 31 tables will go much more quickly.
Then there’s Wallpaper magazine swooping in with Autoprogettazione Revisted at the Architecture Association in London, where AA students and a few name designers show off their Mari-inspired hacks, and there’s even a lecture by Mari himself, which is alternately animated and tedious, and thanks to the on-the-fly translation, twice as long as it would normally be. 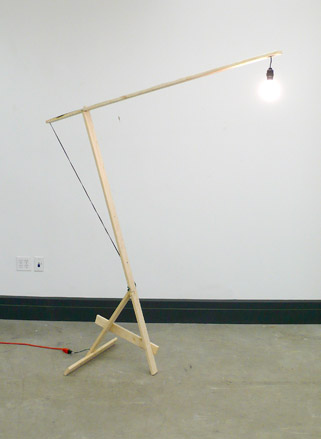 But even as I worry a bit about missing a trend–or worse, finding myself caught up in one–I’m reading the AA’s catalogue and instructions for the show–because yeah, I’d totally make Kueng-Caputo’s awesome lamp, wouldn’t you?–and I find this:

Mari was ultimately disappointed with the original response to Autoprogettazione, believing that ‘only a very few 1 or 2% understood the meaning of the experiment’…Enzo Mari hoped that the idea of Autoprogattazione would last into the future. Autoprogettazione Revisited reveals that it has done just that. Not all of the artist/designer responses in Autoprogettazione Revisited can be duplicated by the enthusiast, but they are inspirational and without a doubt follow the Mari principle that ‘by thinking with your own hands, by [making] our own thoughts you make them clearer.’

I’ve always understood Mari’s project to be a critique of the self-important distinction between the “artist/designer” and the “enthusiast.” In his lecture, Mari actually said that of the many thousands of requests for Autoprogettazione plans, only 1-2% of them were from design professionals. I can totally imagine the head of an architecture school gallery thinking that those two tiny, so-enlightened populations are the same, but I’m not at all sure Mari would agree with her. [thanks andy for the links]