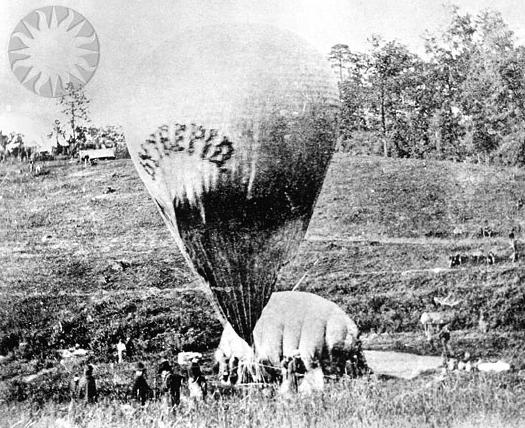 Thaddeus S. C. Lowe was once one of the country’s most famous aeronauts. His grand plan to fly a balloon across the Atlantic was shelved by the outbreak of the Civil War. He preferred to be called Professor. On July 11, 1861, with the help of Prof. Joseph Henry of the Smithsonian Institution, Lowe demonstrated the aerial reconnaissance capabilities of his varnished silk, gas-filled balloon Enterprise by ascending 500 feet above the Columbia Armory [on the site of the National Mall where the National Air & Space Museum now stands] and transmitting the first aerial telegram to President Abraham Lincoln.
Like many first messages, Lowe’s telegram is mostly about itself:

This point of observation commands an area near fifty miles in diameter. The city with its girdle of encampments presents a superb scene. I have pleasure in sending you this first dispatch ever telegraphed from an aerial station and in acknowledging indebtedness to your encouragement for the opportunity of demonstrating the availability of the science of aeronautics in the military service of the country.

Lowe persuaded Lincoln to appoint him Chief Aeronaut and to establish the Union Army Balloon Corps. 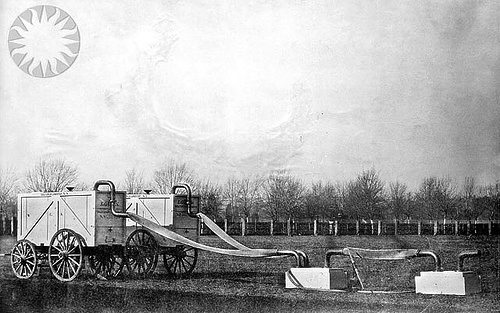 Lowe ordered seven balloons be fabricated in Philadelphia, while portable gas generators were built in Washington:

The generators were built at the Washington Navy Yard by master joiners who fashioned a contraption of copper plumbing and tanks which, when filled with sulfuric acid and iron filings, would yield hydrogen gas. The generators were Lowe’s own design and were considered a marvel of engineering. They were designed to be loaded into box crates that could easily fit on a standard buckboard. The generators took more time to build than the balloons and were not as readily available as the first balloon.

They sound fantastic, and I love the standardized buckboard-scale design. It’s at once obvious and totally subjective. Do any of these things survive? 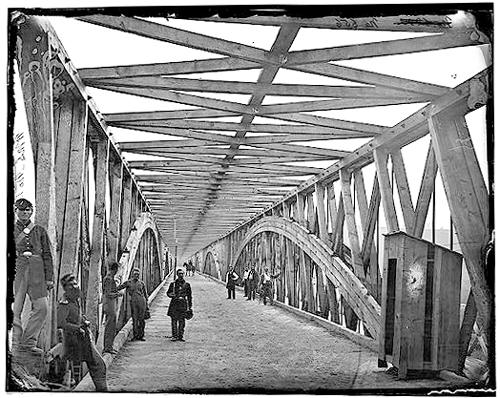 Anyway, even more than the establishment of Balloon Camp, this is my favorite part of the Balloon Corps story, partly because I cross the Chain Bridge at least once a weekday when I’m in DC:

By October 1, 1861, the first balloon, the Union, was ready for action. Though it lacked a portable gas generator, it was called into immediate service. It was gassed up in Washington and towed overnight to Lewinsville via Chain Bridge. The fully covered and trellised bridge required that the towing handlers crawl over the bridge beams and stringers to cross the upper Potomac River into Fairfax County. The balloon and crew arrived by daylight, exhausted from the nine-hour overnight ordeal, when a gale-force wind took the balloon away. It was later recovered, but not before Lowe, who was humiliated by the incident, went on a tirade about the delays in providing proper equipment.

The Balloon Corps continued with somewhat more success until Lowe resigned in 1863. The top photos are credited to Matthew Brady and date to 1862. They are from the Smithsonian’s collection of awesome, unnecessarily watermarked public domain photos of military and scientific balloons. The bridge one is from wikipedia.
On This Spot [blog.nasm.si.edu]
Union Army Balloon Corps [wikipedia]