So I was watching Marie Lorenz’ video, Capsized, on WNYC’s Culture Blog, like I was told to do.
And not just because she had co-curated Invisible Graffiti Magnet Show inside those Richard Serra torqued spiral segments stored along the Bronx waterfront, I clicked through to see photos from Lorenz’ less harrowing journeys down the Tiber in her handmade boat.
Including Tiber River III, where she and a colleague from the American Academy look into the Protestant cemetery at Keats’ grave.
Which contains the epitaph that ends, “Here lies One Whose Name was writ in Water,” which prompts Lorenz to wonder what it means.

“I’m not really sure.” said Margaret. “Something about spirituality maybe, or the eternal nature of art. Its just good writing.” She said.

Well, the last one out of three, sure, but. So I looked it up.
And the full inscription overexplains it a bit:

This Grave
contains all that was Mortal,
of a
YOUNG ENGLISH POET,
Who,
on his Death Bed,
in the Bitterness of his Heart,
at the Malicious Power of his Enemies,
Desired
these Words to be engraven on his Tomb Stone:
“Here lies One
Whose Name was writ in Water.”
th
Feb 24 1821

Which makes wonder if Keats was murdered by his editor.
No, The Phrases Finder entry from 2003 tells me that Keats, 25, whose tuberculosis was not, in fact, getting better on his winter trip to Italy, and whose pursuit of true love was thwarted by his poverty, composed the last bit, at least, as a reference to a line from a Jacobean tragicomedy called “Philaster, or Love Lies-Ableeding,”: “All your better deeds/ Shall be in water writ.”
Which is spiritual in an “All we are is dust in the wind,” sort of way, I guess.
But then the Google Ad next to this epitaph is from an outfit called westmemorials.com: 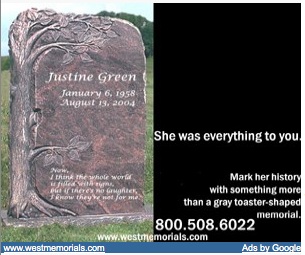 She was everything to you
Mark her history
with something more
than a gray toaster-shaped
memorial.

Which, Bread of Life and all, maybe is something about spirituality, but really, it’s just good writing.