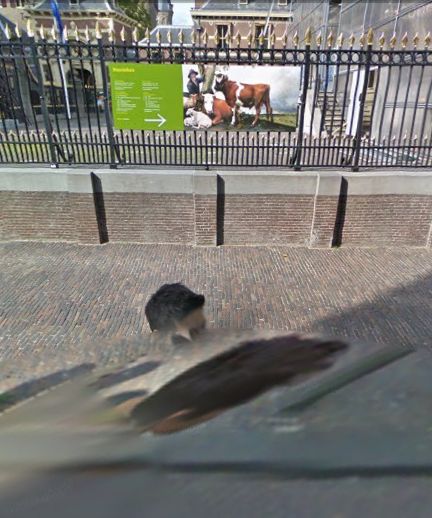 I’ve been thinking about this image from Google Street View, the one of the Mauritshuis which contains two distorted images of the guy’s head. As that elongated lower head shows, Google’s image knitting algorithm apparently combined two photos of the guy, two photos separated by a couple of seconds and/or feet.
It’s like an automated cubism, or futurism, I thought, the photography of multiple simultaneous perspectives, or of motion. Which led me to the work of Etienne-Jules Marey, the pioneering 19th century French physiologist and chronophotographer.
Marey used photography and early cinematography to study motion, and he developed a chronophotography gun which printed multiple exposures on a single surface. Like this pelican landing:

I found a couple of eerily relevant Marey quotes from the excellent compilation by GregP [no relation] on Interfacial Effects, a research-lookin’ blog about art and temporality:

“Marey made it possible for the avant-garde to become receptive to new values: instead of escape into the past, the unreal or the dream, there was the double cult of machines and their propulsion […]” (148) inspiring Giacomo Balla & Luigi Russolo, Marinetti, and ultimately Duchamp (1912 Nude Decending a Staircase)
– Etienne-Jules Marey : a passion for the trace, François Dagognet
“artists who wished to give form to the new experience of time Bergson so articulately voiced were drawn to Marey’s pictures. They were an irresistible and particularly fecund visual source. For artists the attraction of the photographs lay in one important particular: they were the first images to effectively rupture the perspectival code that had dominated painting since the Renaissance. Marey’s pictures depicted chronological succession within a single frame. Chronophotography provided a language for representing simultaneity – what was popularly understood to be Bergson’s idea of time.”
– Picturing time: the work of Etienne-Jules Marey, Marta Braun [google books]

Many of Marey’s studies have been digitized by the BIUM at the University of Paris and are available online.