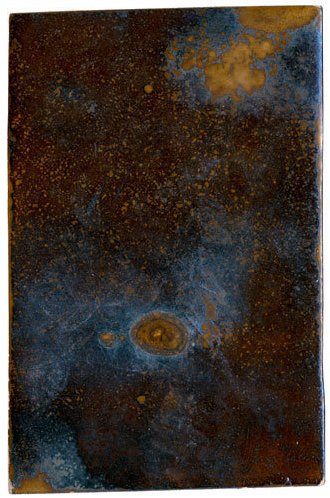 Apparently, in the 1890s, the Swedish modernist playwright August Strindberg went through a period of intense imagemaking. He created paintings and photographs [hold that thought] that sound and look decades ahead of their time using chance and natural/chemical processes such as burning and oxidation. Technically, his photographs are better called photograms, but Strindberg called them “celestographs”:

Strindberg distrusted camera lenses, since he considered them to give a distorted representation of reality. Over the years he built several simple lens-less cameras made from cigar boxes or similar containers with a cardboard front in which he had used a needle to prick a minute hole. But the celestographs were produced by an even more direct method using neither lens nor camera. The experiments involved quite simply placing his photographic plates on a window sill or perhaps directly on the ground (sometimes, he tells us, already lying in the developing bath) and letting them be exposed to the starry sky.
The black or darkly earth-colored pictures that eventually appeared are strewn with a myriad small, lighter dots that Strindberg thought were stars. That they might have been drops of dew, some kind of atmospheric particles, or just some dirt in the developer cannot be ruled out.

It’s remarkable that Strindberg was so acutely aware of the subjectivities of photography’s mechanics while remaining apparently oblivious, or at least sanguine, about the unavoidable influences of his chemical process. 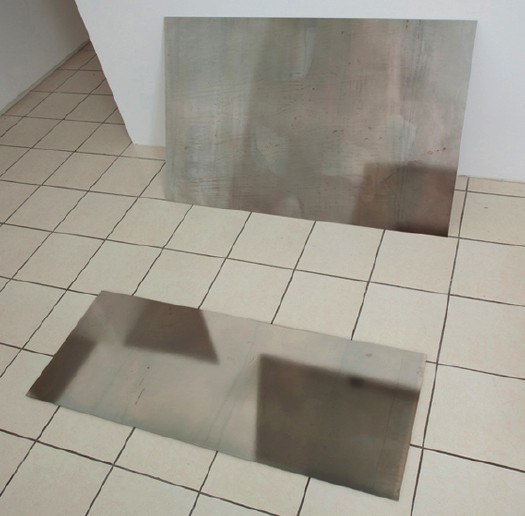 The celestrographs remind me of similarly produced photograms by Liz Deschenes, which she showed at Miguel Abreu last summer. From the press release for Tilt/Swing:

Deschenes fills Bayer’s empty panels with empty photographs – photograms evacuated of all representational content. By exposing photosensitive paper to the darkness of night and bringing the sheets back indoors before sunrise to fix them with silver toner, she produces a range of slightly reflective sheens. The photogram circumvents the responsibility of figurative depiction in favor of temporal record. The photographic moment has passed, but the possibility for another image begins, or continues. The passersby may scan the slippery surface, detecting their own cloudy features. Although out-of-focus and incomplete, we are pictured. The resulting image, more absorptive than reflective, is fleeting. As the exhibition proceeds, the atmospheric circumstances will tend to slightly oxidize the photograms’ surfaces, manifesting a third, time based material operation.