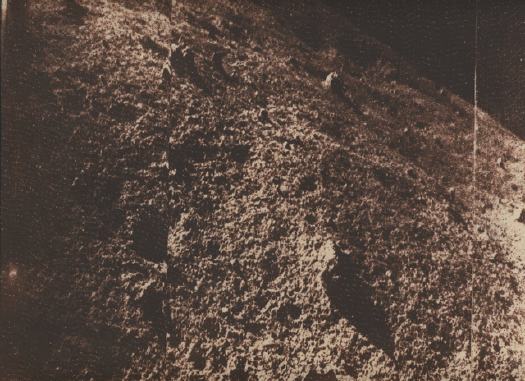 It doesn’t feel like a tangent to go from satelloons and museums on the moon to other aesthetic aspects of space and the space race. Plus there’s the fascination at discovering, as a grown man, how much I hadn’t been taught as a kid. As an American kid.
No one tried to ignore Sputnik or Yuri Gagarin, of couse, but it never registered with me that the Soviet Union reached the moon first. And landed the first spacecraft on it. And took the first pictures of the dark side of the moon. And from the surface.
The Soviets’ Luna Program began way back in 1959, when Luna 2 hit the moon [after shedding a bunch of small Soviet emblems, apparently.] This, beefore America even got a balloon into orbit around the earth.
Also in 1959: Luna 3 returned photos of the far side of the moon.
And in 1966, Luna 9 made the first soft-landing on the moon and transmitted back the first five photos from the surface.
To avoid embarrassment in the case of failure, Russian missions were typically only announced after they succeeded. This meant that each achievement was met worldwide with a sense of surprise and skepticism/resentment.
The first image sent back from Luna 9, however, was intercepted by the University of Manchester’s Jodrell Bank Centre for Astrophysics, which scooped the Russians’ own announcement.
As an image, there’s something familiar about it, at least in retrospect; it looks like what we [now] know the surface of the moon to look like. But in 1966, it had to have packed a punch. Add to that the level of political intrigue, the rivalry of the Space Race, and the ever-present military/nuclear threat of the Cold War, and this image becomes an incredibly powerful, important artifact.
One which I’d never heard of, or seen before last week. It’s as if Apollo and 1969 wiped away the contentious, anxious experience and history of the earlier years. And along with it, the memory, recognition, and appreciation of the achievements that came first.