I was reading Calvin Tomkins’ 1963 New Yorker profile of abstract sculptor Richard Lippold, who was a favorite of the International Style and High Modernist architecture crowd. Depending on your mood, Lippold’s giant, intricate, and ambitious metal & wire works were breaking Important Art of The Future out of the twee confines of the gallery and museum. Or he was making quintessentially aggrandizing corporate lobby art, built-in Bertoias for barons and bankers. 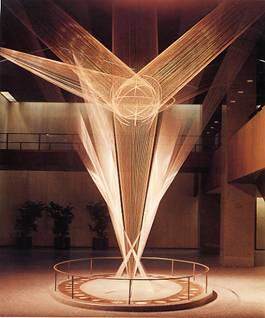 Most of the article tells the crazy story of the creation and installation of Lippold’s best-known work, Apollo and Orpheus, which tumbles through the lobby of Philharmonic Hall [now Avery Fisher Hall] at Lincoln Center. But this remarkable bit is from May 1962, and the making of his most-seen work, The Globe [later changed to Flight], the shimmering, golden wire sculpture in the Vanderbilt Avenue lobby of the Emery Roth, Gropius & Belluschi’s Pan Am building [now Met Life] behind Grand Central Station:

Lippold was also engaged at this time in a curious negotiation with his Pan Am patrons. He had discovered that the building had been wired throughout for Muzak. Muzak has long been one of Lippold’s particular abominations, and, with his customary directness, he voiced his dismay at a cocktail party given by the late Erwin S. Wolfson, the New York investment builder who had largely conceived and financed the Pan Am Building. If the building had to have music at all, Lippold suggested jokingly, why not let him commission some contemporary music by John Cage? Wolfson floored him by saying, “Go ahead.” At the time, Lippold told a friend, “Wolfson belongs to the new breed of industrialists who respect artists. He trusts them, he’s willing to let them do what they want without interference. But, my God! Think of it! Cage is still too avant-garde for the concert halls, and here’s a chance for his music to be played to an audience of thousands and thousands a day! It will be the first time in history that music has been commissioned to go with architecture–or at least, the first time since the medieval cathedral Mass.” Wolfson said he would take care of persuading his board of directors, and Lippold got Cage started thinking about the project.

Not sure what’s more unsettling: the “new breed of industrialists” gladhanding, or the Richter-meets-Kinkade-style paradox of Cage doing Muzak.
But whaddya know, the project went forward. As one might have expected of an artist working in ambient sound, Cage had invested years of thought in solving The Muzak Problem. In his 1998 article in The Musical Quarterly on Cage’s approach to silence, Douglas Kahn makes an interesting analysis of Muzak’s connection to the development of Cage’s best-known composition, 4’33”. In a lecture he gave in 1948, four years before creating 4’33”, but which he never republished, Cage talked about another silent composition, Silent Prayer:…which would consist of 3 to 4-1/2 minutes of sustained silence (the maximum time being just three seconds short of 4’33”) to be played over the Muzak network.

Unlike the silence of 4’33”, in which not playing is the means for the audience to hear the sounds surrounding them, Kahn wrote that Cage saw Silent Prayer more like an intermission, a “reprieve” from Muzak’s unobtrusive yet pervasive performance.
He also makes a fascinating point about Duchamp’s readymades and the length of Silent Prayer [and, by a 3-second extension, 4’33”], which was based on the standard duration of commercial music.
Back to Pan Am. With the technical assistance of Bell Labs [Kluver? Anyone? Aha, Max Matthews. see the update below.] Cage’s Muzak project had made it to the “elaborate presentations” stage, and by August 12, 1962, the idea was fully developed enough for Raymond Ericson to report the details in the Times:

[Cage] decided to “make use of the things that were right there” in the lobby. This was to include the supply of Muzak, for which Pan Am had a contract; the necessary speakers in the walls, and a set-up of television screens with photo-electric cells for keeping an eye on the passers-by.
Mr. Cage devised a system whereby the people going through the lobby would activate the photo-electric cells. These in turn would release the Muzak music, which would become pulverized and filtered in the process. Even people getting in and out of elevators would have a part in producing the sound. Since the cells would never be activated in the same way, the results would be constantly in variation.

Rather than underscore the pervasiveness of Muzak by giving its unwilling audience a temporary reprieve, Cage would make the pedestrian throngs aware of their collective selves, by giving everyone the power to toggle the Muzak off and on.
Unfortunately, Wolfson, the new breed of industrialist, died in July, and the reason the Times was writing about Cage’s piece was because the old breed of board members had just rejected it. “As one vice president said: ‘The American business man and the esthete do not always see eye to eye.” Really.
Ericson’s kicker makes me want to head up to Bard and start digging through the archive at the John Cage Trust: Mr. Cage does not feel particularly disappointed in the failure of his plan. He believes his ideas are sufficiently in the air to be acted on someday.
UPDATE: Apparently, in the Spring 2008 issue of Representations, the University of California Press Journal, Herve Vanel wrote an article about Cage’s relationship with Muzak titled, “John Cage’s Muzak-Plus: The Fu(rni)ture of Music.” which I would buy for something less than the $14 UCP is asking. [UPDATE UPDATE: it seems like I’m the only guy without a subscription, better get on board. Thanks to Douglas and Brian for loaning me their pdf version of Vanel’s article.]
Some interesting finds from Vanel’s paper: Cage had been thinking about a Muzak composition, called Muzak-Plus, in 1961, which I would imagine his friend Lippold would have known about. It was Bell Labs computer music pioneer Max Matthews who collaborated with Cage on the Pan Am Building, not Billy Kluver. But Matthews’ photo-electric switch and mixer design apparently resurfaced as a dance device in 1965 when Kluver participated in Variations V with Cage, Merce Cunningham, David Tudor, and Stan VanDerBeek. Which is like the best Merce & John clip on YouTube.
On the downside, is that renovation related to the 2005 purchase of the Met Life building by Tishman Speyer? Or have security retrofits destroyed whatever spatial integrity the lobby had? Do we know need to wonder what a John Cage piece based on the random, unimpeded flow of crowds into a lobby would sound like before and after September 11?