It’s hard to say where the momentous awesomeness of the Washington Gallery of Modern Art’s 1963 Pop Art Festival first overwhelmed me.
When I learned that noted Pop Artist John Cage performed on opening night?
When I found out that Claes Oldenburg held an early Happening in the dry cleaners on P Street?
Or when I saw this picture from the gigantic dance extravaganza at the America on Wheels roller rink in Adams Morgan, organized by Billy Kluver, with Merce, Yvonne, and the Judson Dance Theatre? 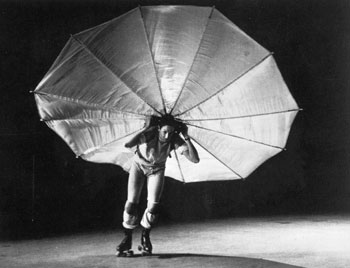 That is Robert Rauschenberg, on roller skates, with a parachute on his back, premiering his dance, Pelican, a tribute/homage to his heroes, the Wright Brothers.
Rauschenberg had been doing costumes and set design for Cunningham’s company for many years, but when the program for the Pop Art Festival performance listed him as a choreographer, he decided to roll with it, so to speak.
Well, it turns out Cage’s performance was a lecture; Oldenburg’s Happening was moved to the gallery; and this photo of Pelican is from 1965, by which point, Rauschenberg had more than a couple of days’ skating practice. But still, the magic lives on every time I go to that roller rink, which is now a Harris Teeter.
Update: Holy smokes, SFMOMA has a film clip. That’s Rauschenberg, Per Olof Ultvedt, and Merce Cunningham dancer Carolyn Brown. The SI’s Eye Level blog has comments by Alice Denney on Rauschenberg’s DC forays.