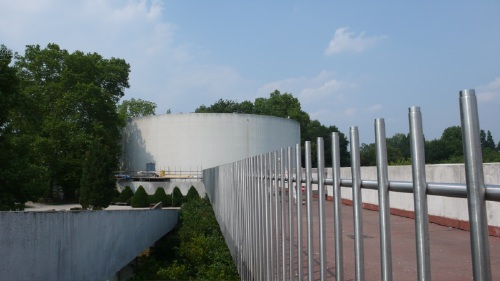 So a quick recap: the National Park Service is determined to demolish the Richard Neutra’s Cyclorama Center, built at the Gettysburg National Military Park in 1961. It was designed to house Paul Philippoteaux’s massive panoramic painting, made in 1884, depicting Pickett’s Charge, and it was sited on Cemetery Ridge, the central target of the assault and the focal point of the cyclorama. [above, a House Industries view from the narrow observation deck and ramp to the battlefield back toward the rotunda, which is largely hidden by trees.] The Cyclorama Center and a nearby Visitors Center were built as part of the Park Service’s Mission 66 program, a 10-year strategic plan to upgrade visitor and interpretive facilities and to make historic sites more car-friendly.
But that mission, and the many modernist-style buildings and structures it spawned, are viewed with disdain by the current Park Service; just as mid-century architecture is becoming eligible for historical preservation status, and as scholarship and critical appreciation is picking up, Mission 66 buildings are under threat of destruction or major alteration in line with current tastes and trends in exhibition and interpretive practice.
As it turns out, the battlefields of Gettysburg have been the site of many strategies of remembrance, commemoration, and visitor/tourist experience. More than 1,600 structures, buildings, sculptures, markers, and memorials have been erected on the site over the last 147 years, not including the railroad station, dance hall, casino, brothel, or souvenir photo studio which were on-site for the massive 50th anniversary/veterans reunion in 1913. Which means that whether officials choose to acknowledge it or not, there is a constant debate at the site about significance, appropriateness, meaning, experience, memory, and history, and that bears directly on the fate and future of the Cyclorama Center.
When I asked about the Cyclorama Center at the information desk in the sprawling, new, historicist, farm building-looking visitor center last weekend, my question was met with brusque disinterest. “It’s just a round building, nothing significant about it,” said the Friends of Gettysburg volunteer.
The Friends of Gettysburg merged with the Gettysburg Foundation in 2007. For almost two decades, the Gettysburg Foundation had helped the Park Service develop and realize the Gettysburg Battlefield Rehabilitation Project, the stated goal of which is to “rehabilitate the land to as close as possible to its 1863 appearance,” in order that the site’s “important physical qualities [will help] tell the story of the Battle of Gettysburg.”
A great deal of a 2007-8 project summary [pdf] talks about altering the terrain–removing or planting woodlands, replanting orchards, redividing fields, repairing roads and paths–which will generate vast “environmental benefits.” “The rehabilitation effort will preserve nature as it preserves history,” promises the Foundation.
But the language makes a sharp shift when discussing parts of the Cemetery Ridge Project:

…in the 43.5-acre area of Cemetery Ridge, many of those features have succumbed to natural vegetative growth and other aspects of evolution. The Cemetery Ridge project was initiated to rehabilitate this highly significant land. This project involves:

I’m sure that the Foundation is not impugning President Eisenhower or the previous generation of Park Service officials who paved over the fallen soldiers’ hallowed ground in the first place. And I’m sure that the parking lot set to remain on the site will be only on the unhallowed parts, just like the roads that traverse the Ridge now. 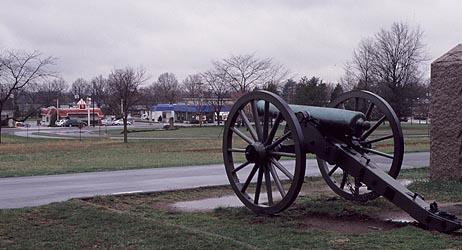 And I’m sure that it wasn’t the Park Service’s fear of antagonizing the local business community that kept them from including the eventual removal of General Pickett’s Buffet, Colonel Sanders’ place, and McDonald’s [above, via jetsetmodern] from the hallowed ground across the street where several thousand other soldiers surely fell. 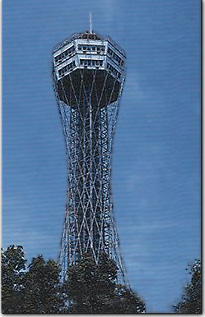 After all, the Park Service had no problem using eminent domain to seize and demolish the Gettysburg National Tower [left]. Built in 1974 on private land adjacent Cemetery Ridge, the controversial 307-ft tower was destroyed with great fanfare in 2000.
And then there’s the to-be-resited monuments, part of the “largest collection of outdoor sculpture in the world,” which were not, of course, present in 1863, but which were “originally placed by veterans of the battle.” Which is, of course, the second-most-irrefutable argument after “hallowed ground where soldiers fell.” [I’m sure the hundreds of additional markers placed by the War Department, and all the other non-veteran-related structures that have accreted on the site–including the incredible WWII-era, government-issue observation towers like the one along the Confederate line–will be rehabilitated away in Phase II.
Next: Some Pointers, or What To Do With Neutra’s Gettysburg Cyclorama Center?