How much of discovery is really just rediscovery? or learning remembering? 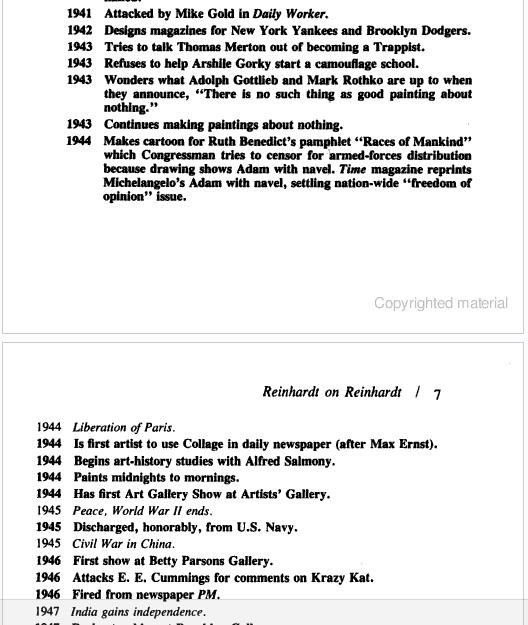 I was waiting to read how editor/art historian Barbara Rose had decided to model the chronology at the opening of her 1991 book, Art-as-Art: The Selected Writings of Ad Reinhardt, after the personal+historical “date” portraits of Felix Gonzalez-Torres:

1943 Refuses to help Arshile Gorky start a camouflage school.
1943 Wonders what Adolph Gottleib and Mark Rothko are up to when they announce, “There is no such thing as good painting about nothing.”
1943 Continues making paintings about nothing.
1944 Liberation of Paris

But then I scroll up and see that Reinhardt’s chronology was his own, and that he was constantly reworking it. The version Rose chose was published in the catalogue for Reinhardt’s 1966 retrospective at the Jewish Museum. 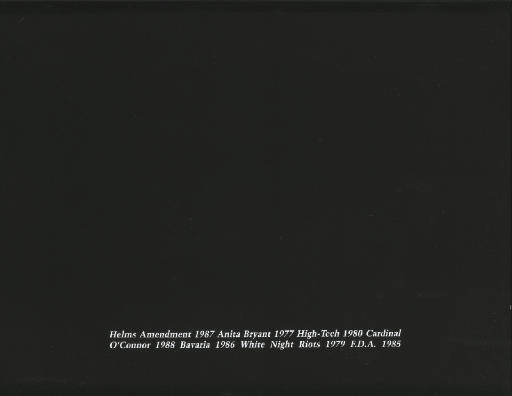 So Rose didn’t get it from Felix, but that means Felix must have gotten it from Reinhardt. And sure enough. I pulled down my special 1994 edition Art & Design, which served as the catalogue for the Camden Arts Center exhibition featuring Reinhardt, Joseph Kosuth, and Felix Gonzalez-Torres. And there is Nancy Spector writing about Reinhardt’s influence, both direct, and refracted through the strategies and theories of the intervening generation of conceptualists:

Reinhard’s parodic biographical exercise was, at the time of its creation, interpreted as mere ‘documentation’, as tangential to his artistic enterprise. But, because of Conceptual art’s deployment of linguistic analysis and its use of language as a medium through which to demonstrate the discursive foundations of art, a younger generation inherited the freedom to use words as a viable alternative to image-making. Therefore, Gonzalez-Torres’ various inventories of disjunctive historical incidents and private moments, followed by the year of their occurrence, can and actually do constitute his art…these ‘date’ works use now conventional Conceptual strategies to mimic the idea of an ‘Artist’s’ chronology. More importantly, however, in the over-arching equivalency of everything listed in these works, Gonzalez-Torres is underscoring a crucial reality in today’s world: that the political cannot be divorced from the personal.

I think Reinhardt makes the same case; and I agree with Spector that Rose’s interpretation is incomplete, and that the extremely politically engaged Reinhardt did not mean for his chronology to reveal art to be “a matter of small consequence” when seen from “a perspective of world affairs.”
Spector suggests another reading, that “[Reinhardt’s] inclusion of cataclysmic world affairs in an ‘artist’s biography’…bespeaks the impossibility of divorcing cultural endeavours from the social and political context in which they are pursued.” [image: Untitled, 1988]
Now about that Arshile Gorky camouflage school…