Holy smokes, people, just watch how these things turn out. In April, I spotted this photo at MoMA; it was in the second floor hallway just past the cafe, with no caption, and a date: 1970. I spent a few weeks trying to search up the name of the artist who made this remarkable, undulating acrylic structure in the Garden, to no avail [MoMA’s records didn’t have any more info about the photo.] I looked through the archive of shows, trying to match it, nothing.
Look at that thing, though, it’s like an ur-Dan Graham. an ur-Greg Lynn, for that matter. A more permanent Ant Farm inflatable. Suddenly, it occurred to me to ask John Perrault, who’s probably forgotten more than I’ll ever know about postwar art in New York. Sure enough, he nailed it: Les Levine. Star Garden, but 1967, not 1970.
Turns out 1967 was a great year for Levine–actually, looking through his works at the Center for Contemporary Canadian Art, a lot of years were great years for Levine. The Silver Environment (1961), vacuum-formed mirrored plastic? fabric? The perceptually disorienting acrylic bubble structures like Star Garden or Supercube Environment (1968)? 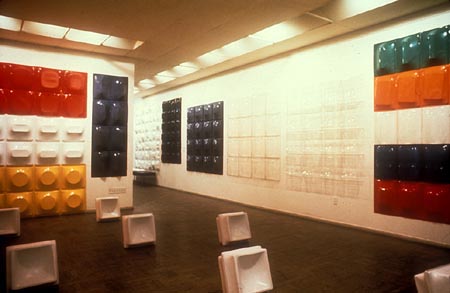 Disposables (1968) [above], a pop-minimalist grid of vacuum-molds of household objects, sold cheap and meant to be thrown away when their moment is over? Wow, Levine’s Restaurant (1968), New York’s only Canadian Restaurant, operated as a artist project, like Gordon Matta-Clark’s Food or Allan Ruppersburg’s Al’s Cafe, only earlier? Is that really TV test pattern print clothing there in 1978? 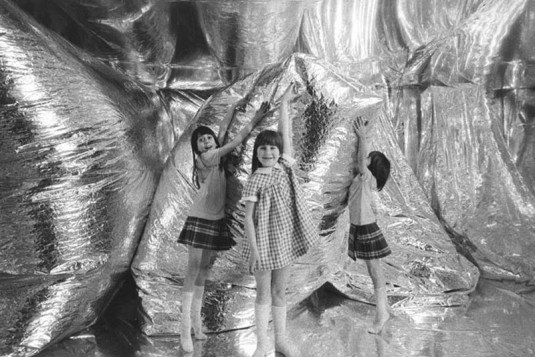 And then there’s Slipcover, a 1967 installation at the Architectural League [image via], which ran concurrently with Star Garden: three rooms covered in sheets of mirrored Mylar, where the space is constantly in flux because of the giant Mylar balloons inflating and deflating. The NY Times article shows Levine working on a balloon while one Linda Schjeldahl seals the edges of the Mylar wallcovering. Schjeldahl, Schjeldahl, where have I heard that name before?
Of course! The University of North Dakota’s archives of Gilmore Schjeldahl, founder of the Sheldahl Company!

The Company was the primary contractor for the Echo II Program. There are also files which contain information about the Echo I and II satellite balloons, as well as samples of Echo I and Echo II skins, and a file containing information about an art exhibition by artist Les Levine in 1967, at the Architectural League in New York City, which featured rooms made of Sheldahl’s Mylar laminates.

Billy Kluver, whose company Bell Labs operated the Project Echo satelloons, introduced Andy Warhol to Mylar and helped him make his 1966 Silver Clouds.
Meanwhile, the manufacturer of those satelloons supplied the same Mylar for Les Levine’s 1967 Slipcovers. Who had some help installing from his friend Linda Schjeldahl, the daughter-in-law of the company’s founder. A friend who, like her husband, Peter, was somewhat involved in the New York art world at that point.