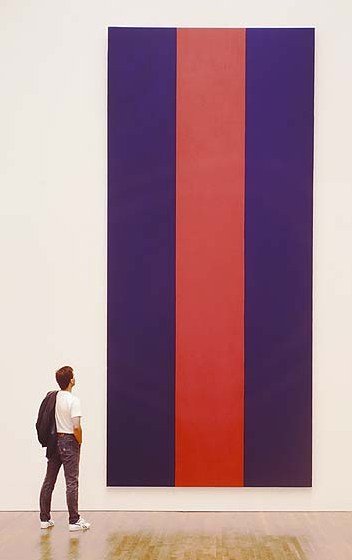 Speaking of National Gallery of Canada upheavals, Walrus Magazine, late-career post-minimalist kitsch, and Blake Gopnik:
In March 2010, Walrus celebrated the 20th anniversary of longtime NGC contemporary curator Brydon Smith’s purchase of Barnett Newman’s towering 1967 painting, Voice of Fire for $1.8 million, which was apparently a lot of money, even in Canadian. The announcement [of the price] set off a political firestorm of conservative, populist wrangling and hearings. It was Canada’s own homegrown version of the American Right’s culture war on the NEA, the NGC’s most famous controversy.
Well, famous in Canada, anyway. As Greg Buium noted in his article, “Firestorm”:

Internationally, the affair caused barely a ripple. Art in America published a short news story. Blake Gopnik, chief art critic at the Washington Post, was then a doctoral student at Oxford and only heard about it from his family back home in Montreal.

And here I am agreeing with Gopnik again! Awkward! Newman painted Voice of Fire for “American Painting Now,” Alan Solomon’s exhibition in the Buckminster Fuller dome at Expo 67. Which I wrote about and dug into rather deeply last October. I even quoted from Voices of fire: art, rage, power and the state, a 1996 anthology of the controversy, and yet I’d forgotten it until reading Buium’s piece. [Maybe it’s just me.]
According to Smith’s account of the making of, Newman’s painting, 8×18′ high instead of 8×18′ wide, Voice of Fire was designed to Solomon’s request for “very large,” vertically oriented paintings able to “hold their own” in a “soaring airy structure” and amidst a lot of visual “competition,” and which, because of the steady movement of crowds through the pavilion, “visitors would not be able to spend long periods looking at.”
Smith also wrote about having spontaneous discussions with Annalee Newman about her husband’s “concern at that time about the undeclared war in Vietnam,” a concern which hovered over the entire pavilion project. Co-editor John O’Brian quoted Solomon as saying, “Given world conditions at the moment, [the plan is] to soft sell America rather than show our muscle.”
Yeah, capitalism, but I’ve always thought Voice of Fire was the best painting of Newman’s weakest period, the hard-edge acrylics, which filled the last big gallery of Ann Temkin’s Philadelphia Museum retrospective. [Hold on, I’m trying to forget that triangle-shaped canvas all over again.]
A late-period acrylic, made to order by an ambivalent artist for a drive-by spectacle designed to distract from the war. With stripped-down, hard-edge abstraction that provides the perfect symbol for anti-intellectualist critics of the art world’s shenanigans. It all sounds like a prime candidate for Blake Gopnik’s Kitsch You Didn’t Think Of! list.
And yet he left it off. With such political savvy I predict a bright future in Canadian art politics for Dr. Gopnik.