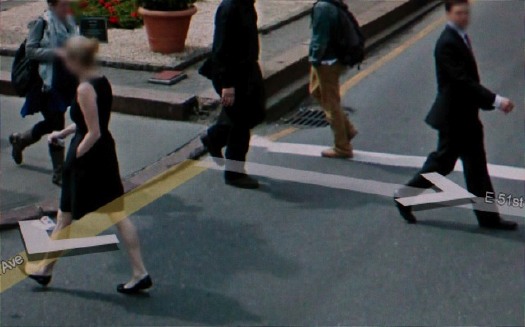 I’m glad and not surprised to see I’m the only person using Google Street View as an artistic source. Since at least last year, photographer Michael Wolf has been making a series of Street View-based works that explore urban life as it’s experienced, seen, and transmitted.
Wolf roams Google Street View in classic street photographer tradition, searching for the hidden, the unexpected, the sublime, the beautiful, the overlooked, images which reveal something about the character of a city and its residents. So far, he’s done Street View Manhattan and Street View Paris. 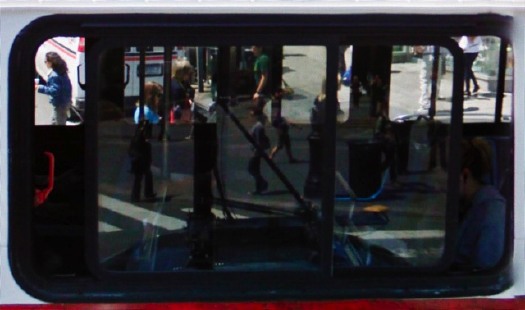 According to his Amsterdam dealer, Galerie Wouter van Leeuwen, where he showed this Spring, Wolf has spent over 400 hours searching Street View, which sounds like a direct translation of street technique to the virtual world. His careful cropping and composition, too, resonate with street photography’s quest for stolen, fleeting, magic images. 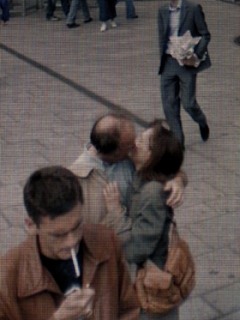 Some of his images carry Street View’s trademark aesthetics: blurred out faces [but not as many as I’d expect], navigation overlays and cursors, and occasionally the fractures and distortions of the pano image knitting algorithms. From the prominence of the screen pixels, it looks like he actually reshoots images on his screen, or as one press release put it, “pictures of pictures.”
His series Street View A Series of Unfortunate Events looks like archetypal on-the-scene photojournalism, only stripped by any news or context other than place. Though Wolf himself eliminates any place specifics or links, leaving each image to stand on its own. 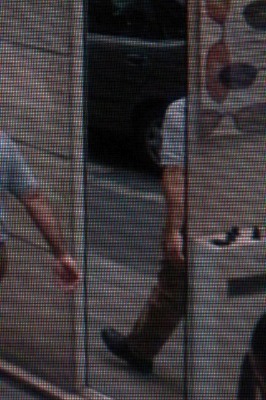 In March, the photography museum FOAM and the Virtueel Museum Zuidas staged an exhibition of Wolf’s Paris Street View photos on the street. Giant prints were placed around Gustav Mahlerplein, a plaza in a modern culture and office complex on the ring road south of Amsterdam. Unfortunately, no images of the exhibition have made their way back into Google Maps. 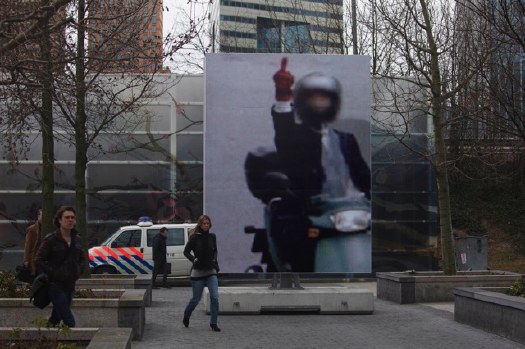 While Wolf’s quote of Robert Doisneau’s Hotel de Ville kiss is the most obvious, my favorite throwback images are like the ones here, where he finds in Google layers of reflections and perspectives that’d do Lee Friedlander and Harry Callahan proud. Really beautiful stuff.
Michael Wolf photography [photographymichaelwolf via things magazine]