This has been sitting on my desktop since last month, when Google Maps announced the addition of 45-degree Aerial View imagery for new locations, including Dortmund, Germany. 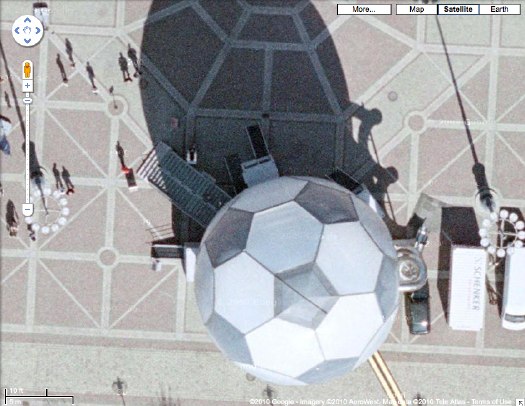 So I clicked over to Dortmund, and zoomed in there to the central platz [Friedensplatz, actually], just getting more and more psyched to see that sweet-looking geodesic soccer ball pavilion up close, and then poof, at the last minute, the final zoom, the Aerial View showed up, and it was from much later. The soccer ball was gone.
But then I forgot all about Google’s 45-degree View when I saw the sun doing it for me. These attenuated morning shadows are just awesome. Like 19th century silhouette portraits as reimagined by Giacometti–and shot from outer space. 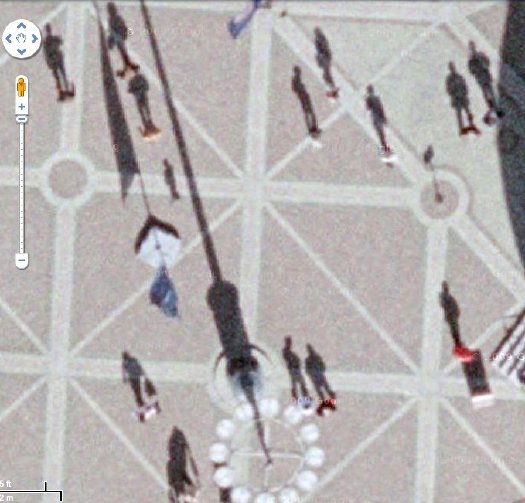 Which reminds me of the statue of a horse and rider in front of the Noordeinde Paleis in The Hague, the first building I saw on Google Maps which had been obscured by the Netherlands’ unique polygonal camo pattern: 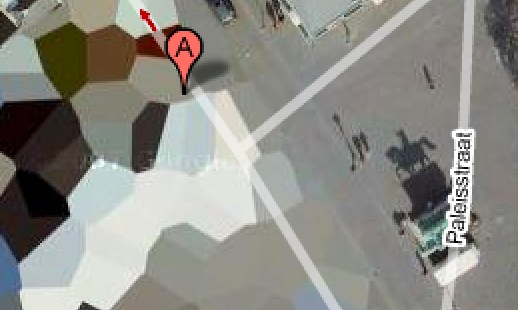 [An update on those Dutch Camo Landscape paintings I was talking about making: I’m still going to do it. One thing I’m very glad for is taking all the screenshots I need for the images I want. I first noticed the changes last winter, but now every the camo on site I’ve mentioned on greg.org has been replaced with typical square-pixel obscuring. Functionally, the camo still works, but aesthetically, it’s a real loss.]
Now about that ball: It is probably better known to the millions of soccer fans in Germany as the WM-Globus. It was conceived in 2003 by artist/musician/actor André Heller, who ran the cultural and arts program for the Deutscher Fußball Cultural Foundation. Described by Heller as a “consulate of anticipation,” the Globus was sent on a 1000-day, 12-city tour in advance of Germany’s hosting of the 2006 World Cup. It’s 18 meters high, weighs 50 tons. Two interior floors contained football memorabilia and multimedia installations, while the pressurized scrim exterior contained an LED map and nightly light shows. Lighting effects designer Anthony Quodt has several articles on the making of the WM Globus and its specs on his site, lightlife.de. Too bad it predates the YouTube era, because the stills look like a hot, glowing mess. 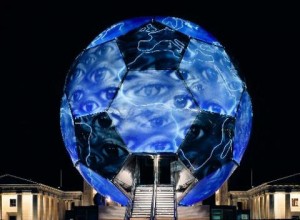 After the World Cup, a Hamburg entrepreneur named Dr. Alexander Extra purchased the Globe from the DFB for EUR300,000, with plans to transform it into a permanent museum of sports culture, the Sporteum. Alas, no money was forthcoming, and the Sporteum failed to materialize. So Dr. Extra put the Globus on eBay last summer. Which turns out to have been a bad time for the geodesic soccer ball-shaped pavilion market, because bidding stopped reached just EUR50,000. The unidentified buyer was reportedly also from Hamburg, so I expect it’s still sitting in the warehouse, but I’ll look into it.