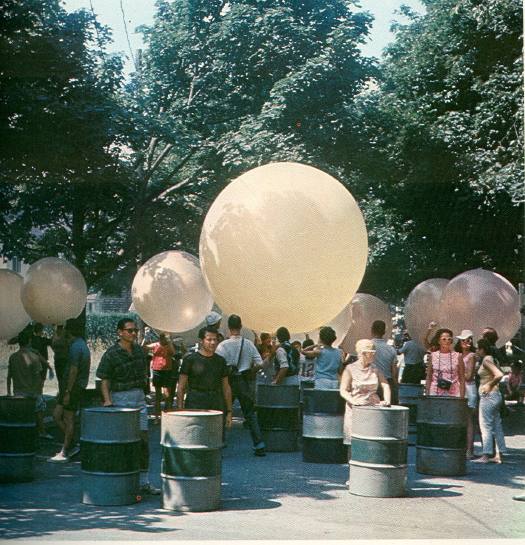 Holy smokes, Gordon Hyatt, I didn’t know what you did 44 summers ago.
Among the episodes of CBS’s news program “Eye on New York” which were acquired by The Museum of Modern Art in 1967 for their Television Archive of the Arts is “What I Did On My Vacation,” which, wow. It was a series of Happenings. In the Hamptons. Conceived and produced for television, by television.
According to Jeff Kelley’s Childsplay: The Art of Allan Kaprow, the producer of “Eye on New York,” Gordon Hyatt, approached Kaprow in the summer of 1966 with the idea of staging a series of Happenings across the Hamptons over the course of an August weekend:

The general idea for Gas, which was largely conceived by Hyatt (and supported in part by Virginia Dwan of the Dwan Gallery), was to interject a series of Happenings into the leisure activities of summer vacationers and locals, who would presumably be caught unawares as they disembarked at the railroad station, took the ferry, swam at the beach, and so forth.

Kelley’s exhaustive recounting of Kaprow’s Happenings is invaluable for getting a sense of what actually happened, but it’s also full of uncritical assertions, revisions and spin. It’s almost as if Kaprow was trying to distance himself after-the-fact from a TV spectacle he readily agreed to, but which he later came to regret. Interesting.
Gas began on Friday August 5th. A parade of oil drums, weather balloons, and homemade hovercraft met the city crowd as the LIRR pulled into Southampton. [photos are documentation by burton berinsky, not stills from the show] On Saturday, Kaprow brought bands, smoke bombs, and skydivers to Coast Guard Beach [now Atlantic Avenue Beach] in Amagansett, where Frazier inflated a giant black phallus of a skyscraper-shaped balloon. Or as the flyer put it, “Procedure: Children and adults may help release helium balloons, frug on the beach, help to start plastic skyscraper, swim.” [Note: If you think you might retell this story sometime, frug is pronounced froog. It is the ultimate White Guy Shuffle.]
From Amagansett, the Happening crew hustled out to Montauk Point, where the fire department was waiting to pump gallons of flame-retardant foam over the cliffs and onto the beachgoing audience. 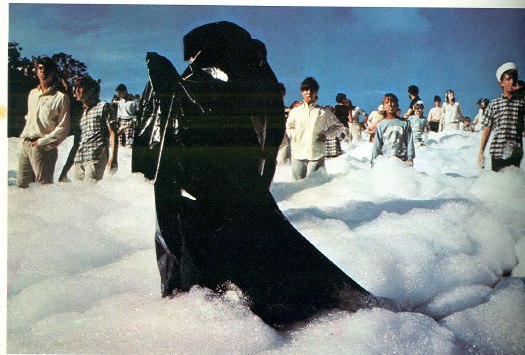 On Sunday, after arranging for three bedsful of nurses to meet the Shelter Island ferry, Kaprow staged two decidedly North-of-the-Highway Happenings in Springs for the kids: a car painting picnic at the auto junkyard, and a foam-filled relay race at the town dump. Alastair Gordon, who was 13 at the time, wrote about participating in the dump event in his awesome book, Spaced Out: Radical Environments of the Psychedelic Sixties, which was excerpted in the Easthampton Star in 2008: 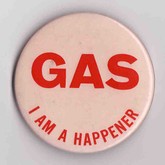 Someone was barking through a megaphone: “Keep moving . . . not too fast . . . don’t look at the cameras. . . .” We were told to move deeper into the sandy pit, slowly, toward a group of people wearing black plastic capes at the bottom of the slope. We wore pink buttons that read “GAS — I’m a Happener” and blew whistles as we marched downward. Stacks of multicolored oil drums were pushed from a ledge, and we were told to roll them back up the slope through the sea of firefighting foam.
I guess I was too young to pick up on the sexual allusion at the time, but the foam felt weirdly comforting as it oozed around my ankles and bubbled up to my waist. Mud stuck to the drums and made them difficult to roll, but we kept pushing because there were men with cameras, and we were going to be on TV.

Though they should have been obvious going in, Kaprow’s problems with Gas seem evident in Gordon’s account: the Happening didn’t just ‘happen,’ it was staged and performed for cameras:

Though nearly everyone, including Hyatt, deemed Gas a success, Kaprow saw it as a reversion to theater. It was a string of “spectacular” Happenings intended more to be seen than enacted, both during the events and on television.

The feedback loop Kaprow loved had been replaced, he found, with

the false feedback of narcissism on a mass-media scale, in which the culture, through the mirror of television, watches itself having a gas.
In the end, the experiment failed because Gas participated in the popular cliches of what Happenings were.

And the avant-garde was inextricably linked with the leisure entertainments of affluent youth. All of which, well, guess what? Whatever Kaprow’s later regrets about it, Gas seems like a peculiar, even unique experiment in corporate-avant-garde collaboration. And the involvement of Hyatt, a member of MoMA’s Junior Council and Dwan in the transform “What I Did On My Vacation’ from arts journalism into public art.
At the very least, it’s a vast improvement over the cliche-ridden, made-for-TV art happenings they’re throwing up these days. [OR. Does good Art-for-TV really just equal failed Art-for-TV + time?]
“What I Did On My Vacation” was shown at Hauser & Wirth’s Kaprow restaging last year, but I can’t find it online. No problem, though, because the National Film Network has a DVD for just $22.
“What I Did On My Vacation” aired on WCBS on Sunday, September 11, 1966.
Vintage coverage from TIME: Gas: Happenings in the Hamptons [time.com]