It’s funny how I think I know the history of the Pasadena Art Museum, when all I’m doing is projecting back and assuming a bunch of stuff based on a bunch of great-sounding anecdotes: 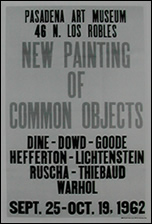 First museum shows for Duchamp, Lichtenstein, Warhol; Walter Hopps and the ur-Pop Art show; great posters [Ruscha, Duchamp, Warhol]; Pasadena Brillo Boxes; Serra’s massive 1970 fir tree installation; the increasingly intrafamily-related theft of Norton Simon’s nephew’s Warhols; Lichtenstein signing his Pasadena billboard.
But then I read through Paul Cummings’ 1975 AAA interview with John Coplans, artist, Artforum co-founder & editor, and former Pasadena curator and director, and it sounds like the place was a total shitshow:
ladies’ auxiliaries overruling curators to keep buying local artists’ crap; architects calling the fire department on curators for hanging shows; firemen ripping lights and cords off of Rauschenbergs; trustees scheduling Warhol shows with Castellis behind their curators’ and directors’ backs; trustees not putting up a dime, or asking their friends to donate; trustees demanding shows that include work they own who then sell that work without notice a few weeks before the opening; and people freaking the hell out when some crazy East Coast guy with a Jewfro drops a dozen fir trees in their precious museum and calls it art.
And on and on. There are definitely some additional sides to the stories I’d love to hear: trustee/collector Robert Rowan, for one. He’s the guy who was apparently running the show during the late 60s, and who plotted the Warhol show with Castelli. And whose Temple of Apollo painting was featured so prominently on Lichtenstein’s billboard.
Also, Norton Simon, who apparently refused to lend all kinds of stuff as a trustee, but who obviously made a deal at some point, otherwise it’d still be called the Pasadena Art Museum.
Hopps, of course. Irving Blum, who drove around LA with a bottle rack in his trunk, waiting to get Duchamp to sign it. Even though a lot of folks have died, there are still plenty who are alive and perhaps willing to talk.
UPDATE: Well this sounds like a start. Tyler points to Susan Muchnic’s 1998 biography Odd Man In: Norton Simon and the Pursuit of Culture, which apparently “comes alive” with accounts of “the bizarrely bitter politics of Los Angeles museums.”