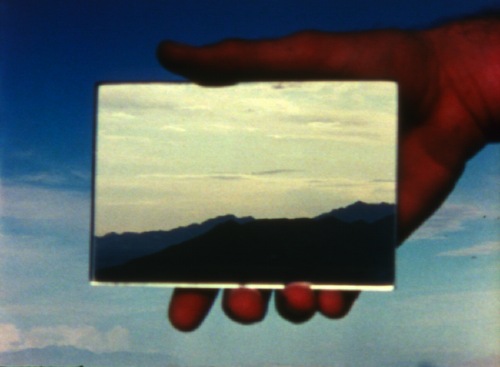 Holy smokes, Gary Beydler. A Los Angeles experimental filmmaker whose 1974 time-lapse silent short, Hand Held Day, was just mentioned by Steve Roden. It’s incredible.
Youtube user austinstein posted this version in 2007, before Beydler’s too-small body of work was restored, so the color is awful, but you can get the idea. Over the course of a day, Beydler shot two rolls of Kodachrome film in the Arizona desert, with the camera pointed east, and the mirror pointed west. The sun and sky did the rest.

On his blog Preservation Insanity, Mark T told the story of taking a leap of faith and restoring Beydler’s last film, Venice Pier, sight unseen in 2007. It’s an journey down the pier, shot in out-of-sync time lapse over the course of a year. It sounds beautiful. Unfortunately, Mark’s blog post was prompted by news of Beydler’s death in January 2010.
To Gary Beydler [preservation insanity]
four of Gary Beydler’s films are available for rent via Canyon Cinema [canyoncinema.com]